Having a Ball (Viennese style) 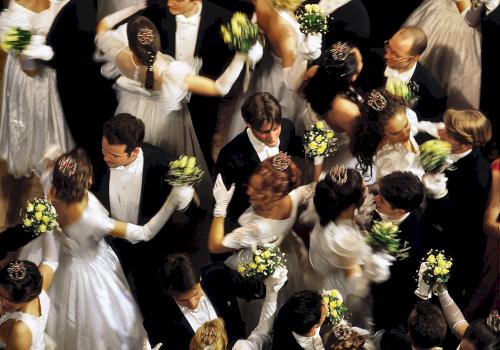 The politics of Austrian high society

The institution of the Viennese ball was recently dropped from UNESCO’s compiled list of Austrian cultural traditions following demonstrations by anti-fascists insisting that the WKR (Wiener-Korporations) Ball, a listed event, has strong far-right connections. The inclusion of this scandalous event (Elfriede Jelinek, Austrian author) hints at the darker side of one of Vienna’s most glamorous seasons, as January and February see the city hosting, in most cases entirely harmless, balls. It is therefore a great shame that the WKR Ball, which consists of various political fraternities (some of which tend towards the extreme right) has this year tainted their good name and long-standing tradition.

Before coming to Austria I had very ambivalent feelings about balls – those of the dancing and fancy clothes variety, that is. A part of me was very excited about a real-life Disney experience, waltzing and grand venues, whilst the other thought the whole tradition seemed outmoded, anti-feminist and slightly pretentious; waiting to be sought out by a dancing partner, I now know, is a faintly nerve-wracking experience. In England, the closest I had ever come to a proper ball was the school leavers kind (less a ball and more a room full of sixth-formers trying to make the best of a party with teachers present) and the kind we have in Durham, at which I had always been a bit hesitant about committing to a proper dress. Yet, armed with the ‘say-yes-to-everything’ mentality of a year abroad student, when presented with the opportunity to attend such an event in Vienna, I was more wildly enthusiastic that I could have ever imagined. Perhaps my new surroundings have conditioned me to comply with such traditions.

There is much pomp and circumstance surrounding Viennese balls, and it is therefore easy to understand why an event such as the WKR has slipped under the radar for so many years. Many even have opening ceremonies, with actual debutantes performing legitimately rehearsed dance routines. This is actually quite fitting, given that the Austrian ball is a longstanding tradition stretching back to the days when such a thing was, in fact, highly practical to the anybodies of Vienna. In addition, the location demands nothing less in some cases; the Hofburg Palace hosts some of Vienna’s finest events and you can literally get lost there – it is nothing less than chandelier central and there’s more than a glimpse of gilt. Again, this does wonders for enhancing the aura of exclusive luxury.

As one might expect, there is a certain element of elitism, exemplified by the extreme amount of waltzing (yes, really! See previous column for more Sound of Music related tales). I decided to learn on the morning of the ball I attended, in a bizarre yet surprisingly useful last-minute lesson in the office from my boss. I eventually managed to spin around with my partner, but still looked like a bit of a lemon. Another irksome feature of a ball is that, on top of the expensive ticket (it pays to be a student for the discount alone), the food is, as is to be expected, overpriced – and tap water is nowhere to be seen. I was whinging about this when it suddenly became clear that if you can afford to spend over a 100€ on a ticket alone (by contrast, student tickets are wonderfully affordable), you probably don’t mind forking out for refreshments once you’re there. I, myself, was very sly and had a large amount of ice in a cup. The whole experience definitely helps to highlight the fact that Austria, too, contrary to what I previously believed, does have echoes of a class system, which often manifests itself in a very flamboyant and pleasant manner.

Fortunately, there is a wide range of balls in Vienna that manage to cater for almost all tastes. Most universities and colleges host some form of event, many of which are relatively casual affairs, in atmosphere at least. The one I find most enticing, however, is the Zuckerbäckerball, which loosely translates at the Sugar-Baker Ball, which is the sweetest of the ball season. Its guests number 3,000 and it faintly resembles that room in the original ‘Charlie and the Chocolate Factory’.

Given the vast scope for fun, flamboyance and funny dancing, it is unfortunate that an event such as the WKR Ball exists, hosting members of Austria’s Freedom Party (representing anything but freedom), where women may be present. Indeed, the fraternity Olympia says it all for the Ball: If you have a girlfriend who is neither beautiful nor quiet… you had better stay at home.