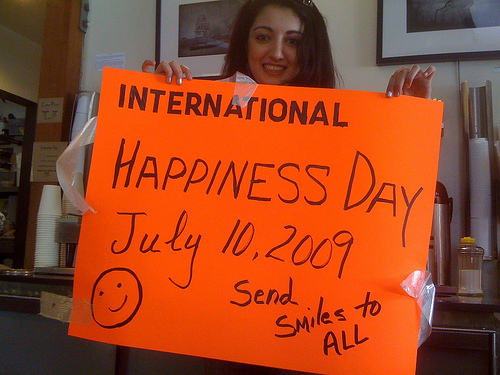 Is there a set path to happiness?

Traditionally, being in good health was associated with the absence of disease, illness or disability. However, greater emphasis is now placed upon people’s mood and psychological health, with the World Health Organization defining health as the “state of complete physical, mental and social well-being”. In the UK, the concept of “subjective well-being” has received publicity in recent days, with the Prime Minister David Cameron stating his desire to officially measure the general well-being of the nation by introducing additional questions to the existing British Household Panel Survey. Such questions would ask people how happy they consider themselves to be, and whether they believe they are satisfying their life goals and ambitions; previously, such “quality of life” measurements were concerned with objective evidence, such as income, years spent in education, and life expectancy. It appears that our subjective beliefs and opinions are being considered more seriously by those seeking to measure our quality of life.

While the use of the term “well-being” has gained popularity in recent years, it is still a complex construct. In research literature, however, “subjective well-being” is often seen as being broadly comparable to the concept of “happiness”. Well-being has traditionally been measured by people working within the fields of economics and psychology, with the economic approach arguing that life circumstances play a major role in determining our happiness. Although proponents of this view would accept that happiness is dependent upon more than just wealth, they generally believe that increased income leads to higher levels of subjective well-being.

In psychology, on the other hand, individuals were deemed to have a particular base level of happiness, dependent on genetic makeup or personality. While particular life circumstances could increase or decrease people’s well-being, it was argued that this only occurs temporarily, with each person’s happiness returning to a “set point” over time. For example, the psychologist Richard Easterlin showed that after basic needs have been met, increases in a country’s wealth do not lead to increased levels of reported well-being. Thus, it could be argued that money can’t buy you happiness. Despite this, others have found that major life events, such as marriage or the onset of a disability, can have a real and lasting affect on well-being.

So what are the pathways towards improved well-being? The hedonic perspective believes that well-being and happiness come about through the maximisation of pleasure and the minimisation of pain. A second approach is the Eudaemonic perspective, which argues that meaning-making, motivation and desire should be seen as being more relevant to well-being. Each approach has its own distinct advantages and disadvantages, and modern ways of measuring well-being utilise elements from both perspectives.

In recent years, Peterson and colleagues have argued that there are three different kinds of well-being we can experience, which are based upon pleasure, engagement, and meaning. “Pleasure” is based on the hedonic perspective of participating in activities which we find enjoyable. Often this can involve simple, day to day activities – personally, I gain pleasure from going out for a walk.

Durham is blessed with some beautiful countryside barely five minutes from the town centre, and is the perfect way to free your mind from the stress of impending deadlines or exams. We each have our own particular activities we enjoy, and setting aside some time to do these things, even when we are feeling overwhelmed with other concerns, can work wonders on our mood.

While participation in pleasurable activities makes us feel happy, it is recognised that in order to make a real difference to our well-being, we also need to focus on the other attributes. The “engagement” aspect of happiness refers to participation in activities where one is fully immersed and occupied with the activity at hand. This may be as a result of participation in a sport or a society, or even through a hard day spent at the library. While writing an essay or revising for an exam may not be the most pleasurable of activities, we still gain a strong sense of achievement once the hard work finally comes to an end.

Lastly, the “meaningful life” aspect of well-being refers to participation in activities which benefit more than just the participant; for example, this may be developing and sustaining friendships, or through doing voluntary work. The concept of “social capital”, popularised by Robert Putnam, is commonly associated with high levels of well-being, and refers to the connections and networks between people, and the solidarity and trust that come about as a result. Durham offers the potential for high levels of social capital, with an excellent support system and the collegiate system allowing us to meet people studying different subjects in a small and friendly environment.

Social capital can take two different forms, the first being “bonding” social capital, which refers to the networks between people of similar characteristics. The second is “bridging” social capital, which refers to the networks formed between people from different backgrounds and circumstances. While being weaker than “bonding” social capital, bridging social capital plays an important role in our progression and flourishing as individuals. I would argue that in order to gain a broader experience whilst at university, we should try and associate with people other than our fellow students, by volunteering in the local community, for instance. As well as giving something back to the local area, this also allows us to meet people from different backgrounds, and helps to improve relations between the university and the town.

Our happiness can be seen as being determined by a number of factors, and involves more than simply trying to maximise pleasure and minimise discomfort. Durham is the perfect environment to participate in activities which can be engaging and meaningful, as well as being pleasurable. Why not try something completely different? You may need to “bite the bullet” and step outside your comfort zone, but you never know, you may be pleasantly surprised.