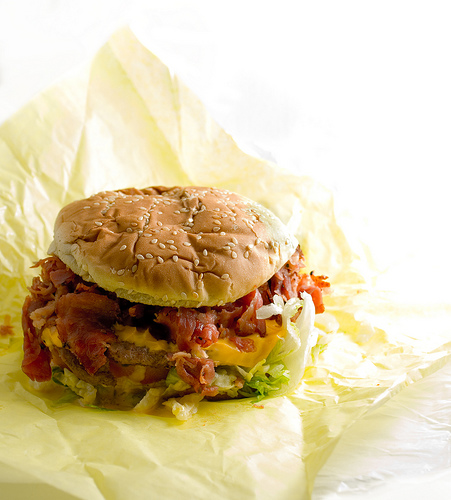 A trigger for the deep-seated guilt of student life?

“I feel guilty about everything, from the pollution caused by Chinese industrialisation to not wearing some pairs of boxers as much as others.”

Guilt enshrouds us. Whether it is monetary, health, or work based, there is no escaping that tarnish of contrition that so often comes in tandem with student life. Allow me to paint a particularly sorrowful scenario for you: hungry after an early start and a hard day’s rowing, I found myself craving nothing other than a chunk of gut-filling, slumber-inducing, artery-clogging cow between bread. I must say, this is a slight vice within my otherwise generally salubrious lifestyle, but every so often something primeval takes over and I won’t be happy until I have some sort of cooked animal in my hand, and subsequently, belly. Anyway, given that I was in Durham city centre, I decided to pay a visit to an establishment that sold such things (but cannot be named for legal reasons, although suffice it is to say their burgers are of a monarchical standard). My point is, having built up this meaty satiation in my head for so long and having endured what is the most bizarrely eclectic “restaurant” music (early ’90s trance, followed by Ella Fitzgerald and then those painfully pathetic pop-pixies, Daphne and Celeste) my sheer level of guilt took over and precluded me from enjoying my dripping, steaming, heart-attack-in-a-bun.

The first layer of guilt was financial (and rather worryingly not health). I had no reason and certainly did not deserve to spend a whole five pounds on lunch. I could be twice as full and considerably better off financially, sitting at home gnawing on a loaf of Hovis’ finest, the occasional thin film of butter as a treat. We all know that this mentality is not restricted to food however. My mother maintains that she did not buy any new clothes during her undergraduate degree (although we do have to allow for a typically economical (cheap) Yorkshire-bred outlook on life). Worse still, one of my housemates was once famed for replying “Nah, its okay, I’d rather buy a pint next week instead” when asked to the pub. Frequently, relative to the cities in which we live, students have a fairly large amount of disposable capital. Despite this, the fact that we are “living without earning” engenders a sense of guilt that often prevents us from buying chicken, or that third pair of silk undies.

Next on the list was health. As an athlete *brushes off shoulders* in addition to attending what seems to be one of the most image-conscious universities in existence, you start to become increasingly aware of what you are eating. You realise that you are not a fresher any more and a diet of super-noodles and cigarettes just isn’t going to cut it. I should not have been sat indulging in this beefy behemoth, but rather quaffing a home-made protein shake, crammed with soya, hummus and some type of esoteric fruit or vegetable (although I remain dubious about the e-mails I receive about the alleged aphrodisiac and “growth” benefits of açaí berries. I’ll stick to turtle eggs and Catuaba bark thank you very much).

I mention work last because it is simply always there. When you sign over your life to a degree course you are essentially accepting the “terms and conditions” that you will never, ever shake that “I could always be doing some work” feeling. When you are a student, time spent eating, washing, exercising and sleeping is all time that could perfectly reasonably be spent in the library; reading until your eyes bleed and you chew your own toenails off in frustration (but of course, even that is time wasted). This however, is an odd type of guilt. Because of its perennial existence, we become strangely numb to it, albeit in the way that if you started brushing your teeth with gravel each morning, eventually, you would get used to that too. It is there during every episode of Peep Show and every sip of tea in the common room, yet we don’t let it affect us. Up until exam season, when all transforms and your social life extends to little more than a few shamefaced moments on Facebook chat, “I should be doing some work” seldom translates into action, particularly if you have companions in your shiftless nature.

Perhaps this is the price we pay for what is otherwise a fairly “relaxed” lifestyle. Sure, you can work harder, you can be more frugal, you can nail your feet to a cross-trainer, but until you have that sheepskin in your hands, those pangs of self-condemnation just become part of the daily routine. It’s probably unusual for something as innocuous as a hamburger to have such a profound effect on someone, but essentially, this burger represented the feelings of poverty, lethargy and indolence that frequent a student’s mind constantly. As all this dawned on me, it is fair to say that this cow produced a little moue.