Getting into the Christmas spirit 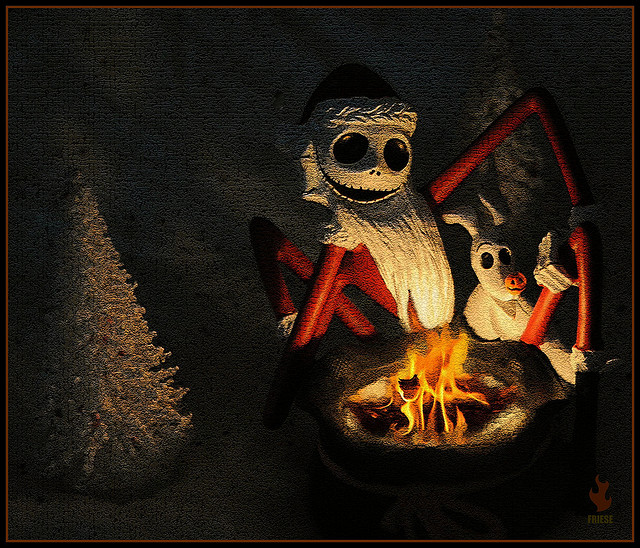 Do YOU believe in Father Christmas?

’Tis the season to be jolly and we are all trolling the ancient Yule tide carol, glad for the break from endless deadlines and seminars that Christmas promises. And, without a doubt, some of this holiday will be spent vegging out in front of a television set. Yet, there are so many truly dreadful Christmas movies. It’s so easy to start with a nice, Christmassy message and then overload it with wide-eyed kids and hammy emotional acting to the point that the film becomes unwatchable. Nonetheless, Christmas is a wonderful time of year, and as such there are also some great films out there. I know many will be breaking out their copy of Love Actually now that it is December, watching childhood favourites like Home Alone with their families or even swearing happily along to Die Hard (though how much relevance Bruce Willis shooting a bunch of people has to Christmas is debatable). Here are a couple of suggestions that you may not have seen to get you into the Christmas mood.

The Nightmare Before Christmas (Henry Selick, 1993):

A musical film which is appropriate for all ages (it worries me somewhat that my other three suggestions all contain bad language). Chances are you know the plot by now, but on the off-chance you don’t… It follows Jack Skellington, the leader of Halloween Town, who is stuck in the doldrums. He’s bored with Halloween. When he accidentally ends up in Christmas Town, he is enchanted by the snow, the presents, the singing and decides that Christmas is what he wants to do this year. It goes about as well as you’d expect with a skeleton who only has a rudimentary understanding of ‘Christmas’ organising the whole thing. NBC has all the wonderful creepiness of a stop-motion film, which works perfectly for the premise. The soundtrack is Danny Elfman, which means if you like the eerie music of other Tim Burton films you’ve probably come to the right place. Not to mention that most of the songs beg to be sung along to. There’s a sense of childish wonder to the film, even if the final message is that, while following your dreams is good, some things are better left to the professionals.

A slightly more cynical affair, produced by the Coen brothers. Billy Bob Thornton oozes venom with every line as the con-man working as a mall Santa. He is your typical alcoholic, bitter scrooge just waiting – according to the rules of Christmas movies – to be turned around by the spirit of the season. When he meets a lonely and bullied child, he starts to get his emotional redemption… kind of. The film is oddly touching and laugh-out-loud funny, despite the fact that it keeps you wondering why the child protection services have not already been called in. The main character doesn’t end up giving away money, singing carols or ‘God bless us everyone’-ing. He shows his own version of kindness through painfully inappropriate actions like beating up children and guiltily replacing the advent calendar chocolates that he ate with pills, as they were all he had to hand. Deep down, the movie has the same old message about people being more important than money or gifts, but it manages to deliver that while ending with both a police chase and a kick to the groin. It also gains points for probably having the most profanities of any Christmas movie ever.

2003 was clearly a good year for the Christmas spirit. The plot centres around three homeless people in Tokyo finding a baby and trying to find her parents, while stressing the numerous little coincidences that connect us to one another. This film is another one you’d not want to break out for kids, what with the violence, suicide attempts and swearing. The three main characters form a rather touching family; a father who walked out on his home, a runaway teenager and a transvestite who identifies as a woman. But they aren’t perfect heroes; many of the problems they deal with are created by their own actions and they have to learn to deal with that. The animation, as always with a Kon film, is beautiful to look at, if slightly strange; the ending credits show various buildings dancing to Beethoven’s Ode to Joy. The film is funny without losing sight of its message, sweet without being preachy and follows the Christmas movie tradition while being a film that rises above being solely a Christmas film. As far as legacies go, Kon didn’t leave a half-bad one behind him.

While he might be better known for less child-friendly watching like Trainspotting and 28 Days Later, here Boyle creates a sweet Christmas fable with a child protagonist who manages to be genuinely good without being so cloyingly sweet as to annoy the hell out of the audience. The film follows Damian, seven years old, religious and dealing with the death of his mother. He does this by talking to the saints who appear to him, often asking them if they’ve seen her. One day, a huge bag of money literally lands at his feet. While his older brother insists on spending it on himself, Damian uses it to do all the good he can, shoving it in charity boxes and taking beggars to Pizza Hut. The characters are realistic and likeable, and coping with the death of a loved one is handled well. In one scene, you find yourself wincing as the eldest brother uses their mother’s death as an off-hand excuse to get out of trouble, just because of the look on their father’s reaction. James Nesbitt gets an excellent scene as he realises that his avoidance of talking to his children about their mother hasn’t helped them move on after her death. The heart-warmingness is only increased when you realise the cast and crew donated the money that would have gone on their t-shirts to Water Aid in keeping with the spirit of the film.