G is for goodbye 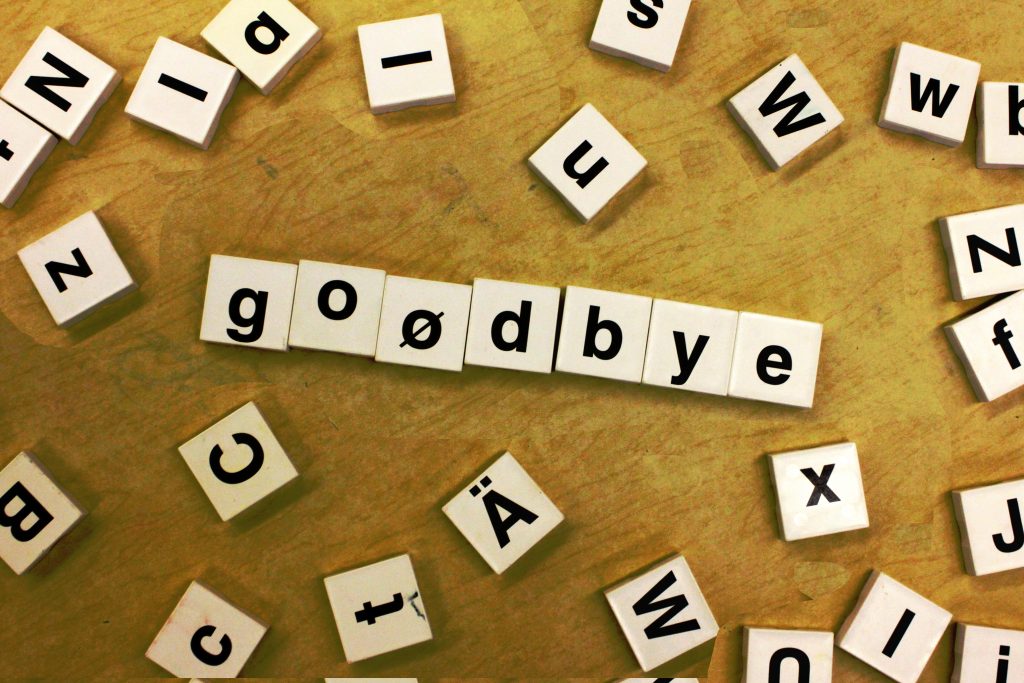 It’s been two weeks since I left Durham to return to a place that, for the meantime, I call home. Before leaving I had to undergo the gruelling task of saying goodbye to people I may or may not see again. I did forget to say a few goodbyes, so I managed to upload my sentiments on Facebook and told myself that that was good enough. Better than nothing.

Back in high school, when I went through that inevitable phase that every teenage girl goes through and looked up various sappy quotes from books that I had no intention of reading, I came across this quote. “I do not say goodbye. I believe that’s one of the bullshittiest words ever invented. It’s not like you’re given the choice to say bad-bye, or awful-bye, or couldn’t-care-less-about-you-bye. Every time you leave, it’s supposed to be a good one.” It’s from John Green and David Lethitan’s book Will Grayson, Will Grayson. I haven’t read the book so I have no idea what the context was, but it does make you think. If saying bye to someone is mostly a sad task, why on earth would you label it a good one?

The Oxford English Dictionary says that the word is originally a “contraction of God be with you!, with good substituted on the pattern of phrases such as good morning.” That in itself explains a lot. So it’s more about the God is being with you, than actually thinking that separation has to be good. It makes sense that you want God to be with someone that you have to say bye to – not that I believe in God or anything, but if there was an all-knowing deity that looked over everything and everyone with benevolence, it’d be nice to think that they’d be with the people you care about. But then, how did “God be with you!” turn into “goodbye”? Why are there two o’s, where did the “with” go, how did everything become squished together to form a word that seems to have nothing to do with the original sentence. I have no idea. These are just random questions that I probably won’t be able to answer. How words become contractions are not my interest – I just want to think about why there would be the “good” in “goodbye”.

People tend to sugar coat things they do not like. Maybe that’s why children’s medicines are always sweet. That’s why people tend to lie to you about things you don’t want to do. Don’t worry, it’s not that hard. Don’t worry, it’s not scary at all. Don’t worry, it’s not going to hurt. The truth is, most of the time it is the exact opposite of what they say. It is hard. It is scary. It is going to hurt. But people are in constant need of reassurance, and although words can be futile, sometimes they can help. Words often hold the power to change the way you look at things: this morning might not have been a good one (mornings, in my opinion, can never be good!), but a “good morning!” greeting can immediately make you feel slightly better about the long day ahead of you. Positivity. That’s important.

In Korean, the word for goodbye can also be used when you say hello: an-nyoung. In Japanese, although there are many words you can use for goodbye, the one that is widely known is sayonara. However, this is only used when you may not see the person for a long time. In French, there’s au revoir, which means goodbye until we meet again. I don’t know many languages, but I’m sure that there are many different ways of saying goodbye that hold different meanings. But even if it is a farewell, there’s always that sense that there will be a reunion. That this isn’t an end, that everyone will come back and everything will be just the way it was. It’s just another way to make things look less sad, I suppose.

And when you get an email from college telling you that there is a parcel waiting for you in reception, it doesn’t really feel like you’ve left anywhere at all.