Fumbling in Erasmus Land: Putting the ‘Sham’ in ‘Shamrock’ 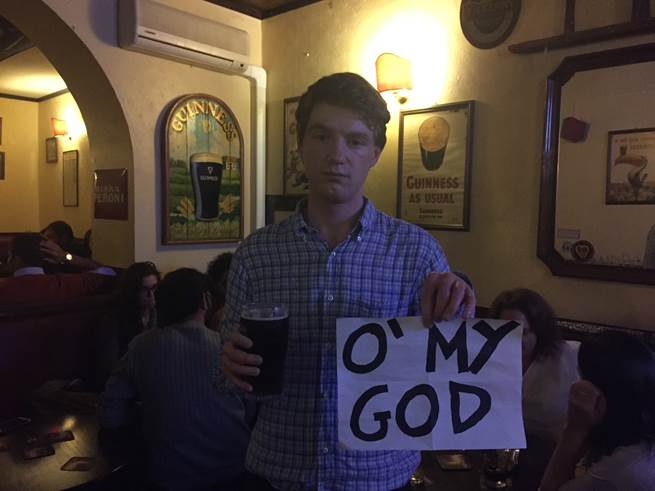 Worse than a Wetherspoons in an airport

Now, I know what you’re thinking. “Irish pubs? Surely Hal has got on the wrong Ryanair flight.” I can confirm, though, that I have not in fact been wandering obliviously round Dublin for the last six months, wondering why I could understand even less of what the locals were saying, why their skin had been bleached white like some nation-wide tribute to Michael Jackson, and why all the pasta had mysteriously transformed into potatoes. I’ll forgive you for your ignorance because, contrary to expectations, Irish pubs are only present on the continent (since time of writing, I’ve actually spoken to a girl from London who says she attends one regularly, although ten minutes of fruitless searching failed to uncover the offending establishment – called the ‘Cock and Blister’, or something similar).

Indeed, I would say that the name was quite deceptive, as an Irish pub is neither a pub, nor Irish. A ‘pub’, in my mind, connotes a place that not only serves alcoholic beverages with a free side of questionable banter, but a place that has history. Moreover, it is exactly this history that helps the pub serve as an anchor for the community. When I sit in a pub, my glass half full or – more likely – half empty, I like to imagine myself as a link in a long chain of inebriation. I am but one of countless people who has sat in this exact spot, drinking, laughing, and ultimately trying to make the best of what little life has given them – a little like the final pint after last orders.

Irish pubs, on the other hand, seem to be entirely founded and run by British ex-pats, who were, at one time in their life, possessed by the rather far-fetched idea of starting up a pub in a foreign country. Remarkably, and in the great tradition of exploitative marketing ploys, they seem to have universally landed on the theme of ‘Ireland’, in the hope that orientating a pub around a borderline-offensive stereotype of a nation afflicted with perennial drunkenness will entice the locals, and by golly it has.

Walking in to any one of the many that plague Rome like a cultural virus, the senses are immediately assaulted with a vision that is so overwhelmingly, irreverently and impossibly Irish. Posters and pictures of Guinness logos and pints hang proudly on the walls, alongside innumerable Irish flags and scarves of Irish football/rugby teams. Framed quotations of Oscar Wilde also make an appearance, and all the while U2, the Pogues, and – rather erroneously – The Cure play over the background chat. If you think I’m making it up, I’m not. In one Irish pub I go to, the poor people behind the bar are made to wear leprechaun hats, which they sport without a shred of irony. To be honest, if I were made to wear one of those when I did my evening shift every night, I can imagine the novelty wearing off somewhat. It feels like you’ve stumbled onto the stage set of a really crap BBC 3 sitcom.

Perhaps a better way to describe them is a ‘sort-of-pub-that-is-Irish-themed’, although that doesn’t really have the same ring to it, eh? I don’t know what the Italians were expecting: that they would enter, being promptly met by a beaming Louis Walsh in a bright green shamrock uniform before being given the grand tour, like they’re in some Celtic Jurassic Park. Something like this, perhaps:

“…And on our left, there’s Paddy and Sinead, our resident gingers – they’re so pale, they can’t go outside here in Rome even at night, so they’re trapped here until their cousin Eoin comes back with some more SPF 200.”

(Paddy and Sinead wave back, before returning to taking it in turns to throw darts at Jedward.)

But of course none of that would happen. Primarily, perhaps, because at the first opportunity one of the leprechauns would probably nick the gold and run away to Berlin to blow it all on cocaine and hookers. (At least that’s what I’d do. I’d make a terrible leprechaun). Irish pubs, therefore, form a sort of cultural melting pot for Italian locals, and two other kinds of people. The first are all those who find the prospect of visiting anywhere vaguely unfamiliar and Italian too daunting, or just simply can’t be bothered. Generally this group consists of British ex-pats and sometimes other Germanics, who frankly prefer to spend their Friday and Saturday nights with their own kin, talking enthusiastically about tea, long queues, and the Queen.

The other, and far more common, group is the tourists, comprised primarily of British or – God help us – Americans. This is the kind of person who turns up in socks and sandals, has one look round the Pantheon, posts a photo of the hole in the roof on Instagram – presumably with some horrible hashtag that dismally misses the architectural significance of the building – before looking around thirstily for the nearest watering hole, as if to reward their lamentably anodyne attempt at cultural integration.

For both parties mentioned above, an Irish pub is the perfect meeting spot: an emerald utopia, presented in a format easy to understand and operating entirely in English, they provide comfortable seating, with British football on the telly. They even offer the home comfort of a ‘pint’ instead of this poxy 40cl nonsense. It truly appeals to all English speakers. All those, it would seem, except the Irish.

The one thing that you can guarantee about an Irish pub is that there will be no Irish people there. Not a single Irishman. Not one. It’s like how the only people who have the ‘I heart NYC’ t-shirts are categorically people who do not and have never lived in New York City. Indeed, not only would it appear that the Irish have never set foot inside an Irish pub, but that the owners have never visited Ireland, nor, for that matter, even met an Irish person, which is their loss (for those among you who have also not had the pleasure, they’re basically like us, but speak a bit louder and their profanity of choice can be transcribed as ‘whale oil beef hooked’ – say it out loud).

Irish in theme, but made by Brits – think Father Ted.