Fumbling in Erasmus Land: Eating out in Italy 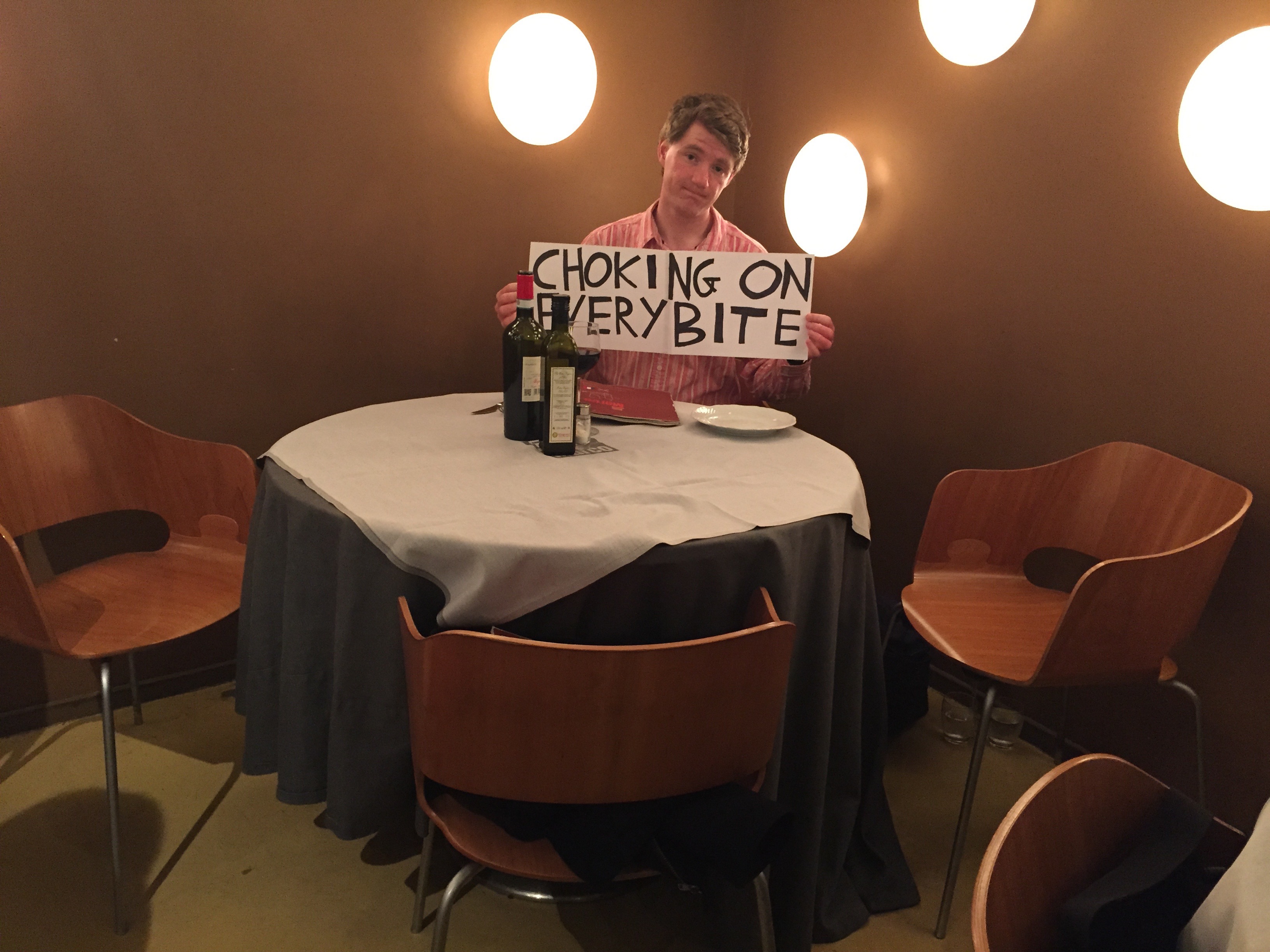 I’m not always this lonely, I promise

I really couldn’t write a column on my time in Italy without including an article on eating out. Indeed, eating out is far more central to Italian culture that it is to us Brits; whilst we regard it as a pleasurable social experience, but one of many from which to choose, the Italians seem to regard it as an integral part of any social interaction. Every Italian has their own favourite restaurant, and I – being a self-professed child of Italy – am no exception. From time to time, I enjoy going there and eating my meal at length over a good book. What I’ve noticed, though, is that not only are all the customers in the restaurant the same, but they always sit at the same tables. It’s like the restaurant has its own seating plan. Furthermore, as the lone outsider, they also notice me. So alien a concept is dining alone to them that, looking up between pages, I sometimes catch whole tables looking pityingly at me, as they exchange hushed words, presumably on my (apparently) wretched state. As the Italian saying goes, “he who eats alone chokes on every bite”.

Tonight, though, was not to be one of those nights where I endure the silent social commentary of an entire restaurant of sympathetic Italians. For, tonight, I’m dining with friends. We are due to be eating at La Pizzeria, an imaginatively named restaurant in Trastevere, a hip-and-happening part of South-West Rome. By the time we arrive, the place is absolutely packed, but fortunately one of the group has made a booking for us. Less fortunately, however, the restaurant had already given away our table to the group in front, mistakenly thinking they were us. In order to get seating for our group of 10, their solution was to wait for 5 adjacent tables to become free, before pushing them together. Of course, this also involves us standing around outside, with the waiter returning every five minutes to tell us “just another five minutes”, with such repetitive regularity that he somewhat reminds me of an alarm clock on snooze. In the end, both out of frustration and out of disinterest for customers’ feelings, he seats 8 of the 10 of us next to the last of the occupied tables, thereby suddenly surrounding a poor old couple occupying the last of the 5 tables with jovial 20-somethings. The strategy works, and they leave only a few of minutes after our strategic encirclement.

The restaurant itself is pretty nice. It has a nice layout, good décor, and possesses that elusive trait that makes or breaks all TripAdvisor reviews: ‘ambiance’. However, as I take in my surroundings, I see something rather perplexing: at the end of the room, above the toilet door, there is another door seven feet off the ground. It serves no apparent purpose except to open onto a four-inch ledge upon which numerous wine bottles are placed. A friend suggested it was there because they didn’t have a ladder to reach the wine bottles. Of course, this would mean that, instead of buying a ladder, they chose instead to invest in knocking down a wall and installing a door. If so, they need a new accountant. Perhaps most perplexingly, though, is the fact it has ‘private’ written on front of the door. Why? Is it to deter particularly inquisitive customers, who, misguidedly presuming it to be a ‘bonus room’ reserved only for the more agile of customers, would scale the wall like Edmund Hillary?

Almost immediately, the waiter appears, and insists upon taking our order in faltering yet bellowing English. I glance down the English menu, which inevitably has its errors. The first I notice is ‘T-ass-boner steak’. I wasn’t going to be having that. Equally bewildering was the restaurant’s specialty: ‘Fried Alice’. Although clearly a mistranslation (‘alice’ means ‘anchovies’ in Italian), I couldn’t help hoping this wasn’t yesterday’s unsuccessful waitress. I opt for the capricciosa, simply because it has an egg in the middle, which always intrigues me. In fact, I’m waiting for the day when it’s served on a square plate so that the whole dish looks like a subsetted Venn diagram. My friend, on the other hand, has the margherita, which is, frankly, a drab choice. Ordering a margherita pizza in an Italian restaurant is like choosing Ringo as your favourite member of the Beatles.

What follows is a sequence of extremely high quality food and drinks, all at very reasonable prices. The house wine (€4 for a litre of the stuff, an absolute steal) simply keeps coming, which leaves my liver in fits of ecstasy. The pizza is superlative, and far better than anything a British chain could throw at me (except perhaps the cheese stuffed-crusts at Pizza Hut). Both leave me contently full, and it is then that the restaurant played its final card: grappa. Supposedly an Italian delicacy originating from 15th Century wineries, grappa is the Italian’s post-meal drink of choice, and God knows why, because it tastes horrendous. I’ve had the drink in the past, and it’s worse than straight vodka, because at least vodka doesn’t have a taste. I would tentatively place its taste somewhere between port and cat piss: hearty, but it’ll make you retch. Perhaps Italians are so fond of it because the foul taste reminds them that all good things must come to an end; it certainly can’t be for pleasure. Little wonder it hasn’t really taken off in the last half-millennium. Whilst chugging it down, egged on by a couple of keenos who’d already finished before I’d even started, I am strangely reminded of a rugby initiation I’d witnessed during my Freshers’ week, after which I’d silently sworn never to partake in anything so revolting. I care to revise that – I’d choose a dirty pint over grappa any day of the week. And so should you.