Industrialisation changed Europe beyond recognition. Economies flourished and evolved at unprecedented speeds. So too did political states modernise. The franchise permeated British society, French workers received the right to strike, even the newly born German Empire lay the foundations for health insurance with innovative legislation. Europe even bounced back from an economic crash in 1873, the first Great Depression, with the Second Industrial Revolution, seeing huge advances in chemical and electrical engineering, particularly from Germany. Surely this was the peak of civilisation? Surely these were new days of glory that would last forever? Yet, in a matter of weeks and days, Europe was engulfed in a nightmarish, unthinkable war, more deadly, shocking and vast than any of its predecessors. The order imposed by the post-Napoleonic War Congress of Vienna responsible for Europe’s most peaceful century had ended. A conflict the likes of which the globe had never seen raged. This was World War.

Though some saw a war between a power-hungry Germany and a dominant British Empire, the fundamental forces propelling Europe from the Vienna to Armageddon a century later were not understood. The outbreak of the First World War, the tragedy that claimed 16 million lives, should be understood not through the simple dynamics of Anglo-German relations, but through analysis of the progressive challenges to and break down of the post-Napoleonic War order which seemed so promising. 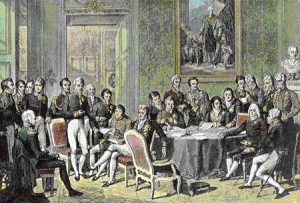 In the key strength of the settlement decided in 1815 at Vienna, the assertion of a hierarchy bent on deterring another war, a terminal flaw in post-war international orders can be identified. The fundamental weakness of any major redress of international hierarchy is that it is shaped by the contingencies that have demanded such action. As Napoleon’s campaign to subordinate all of Europe to French Imperial control, having seized power in the wake of a violent revolution, was coming to an end, Austrian dominance was engineered to ensure such a thing would never again be possible. The Troppau Protocol of 1820 bolstered monarchs’ power to do so. This system could protect against another French Revolution, revolution from below. But it could not protect against revolution from above. 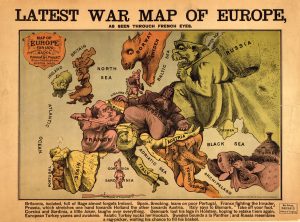 Whilst the French Revolution was a peasants’ movement, the Italian Risorgimento, birthing the Kingdom of Italy in 1861, was a bourgeois movement, the unification of Germany in 1871 an aristocratic movement. With Prussia’s rise, Austria’s decline and two new states emerging, major reconsideration and communication over how to accommodate such changes was necessary, yet lacking. This is to name but a few changes that sent near fatal shockwaves through the infrastructure of Europe, but the bottom line is that international orders constructed to address issues of their time with resources of their time have an expiration date. 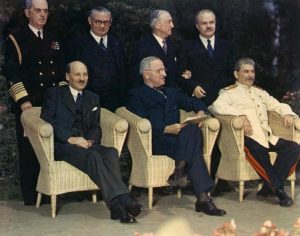 We should not be so arrogant as to assume that the men setting out to make peace in 1945, constructing the post-war neoliberal order we still live in, did a better job. The settlement was constructed in a time of massive disparity in the eastern and western visions for a post-war world; in order for the west to resist a looming Communist expansion, the most powerful capitalist economy was required to take centre-stage. Enter team America. Not an autocratic regime as Austria was, the democratic home of the brave has been able to sustain a dominant position that has produced a more peaceful western world than preceding centuries. Surely, then, cataclysmic wars are a thing of the past? Surely, we are too enlightened to go to war? Unfortunately, and disturbingly, the world always has been, and still is, subject to trends not sufficiently understood until after they happen. Just as the bankers thought the glorious reaping billions upon billions from seemingly ingenious sub-prime mortgages could last forever, in 2008 the bubble popped.

Though some stabilising action has been taken in response to the changing circumstances of the post-war order – negotiation for example, over German reunification – the chief threat to the current world order is yet to be meaningfully addressed: the rise of China. As a plurality of eastern economies grow, India being another example, and more countries begin to move to the stunningly rapidly growing China for primary trading, a polarised global dynamic may be developing. Not only worrying is China’s apparent disregard for international law, blocking legal shipments from other countries for example, but the fact that the Chinese are readier to take necessary action to sustain an order beneficial to them whilst the west fails to redress an order which, like that imposed in 1815, cannot last.

That Xi Jingping, president of a communist state, championed free trade at the World Economic Forum of 2017, denouncing protectionism as being “like locking oneself in a dark room,” is highly disconcerting. The assumption could be made that this shows China is prioritising economic growth above all, and surely war would be counterproductive? Xi does not just aim to build a strong economy with free trade. He aims to build a new era, a phrase he used 36 times in his party speech in October. Whilst he realises war would be cataclysmic for his nation, potentially setting back China’s GDP by 35%, his aims of China becoming a chief innovator by 2035, and achieving ‘global influence’ by 2050 mark an implicit challenge to the post-war order. How this trajectory towards potential world war will be dealt with will truly test this order. With the sheer scale and power of modern superpowers, unmatched anywhere in the past, the lamps would not simply go out all over Europe, as Foreign Secretary Edward Grey famously said on the eve of the Great War, but all over the world. If we are not to learn from the mistakes the men of Europe made between 1815 and 1914, the same terrible mistake could befall us. We must attempt to tackle the trends propelling us to self-destruction.