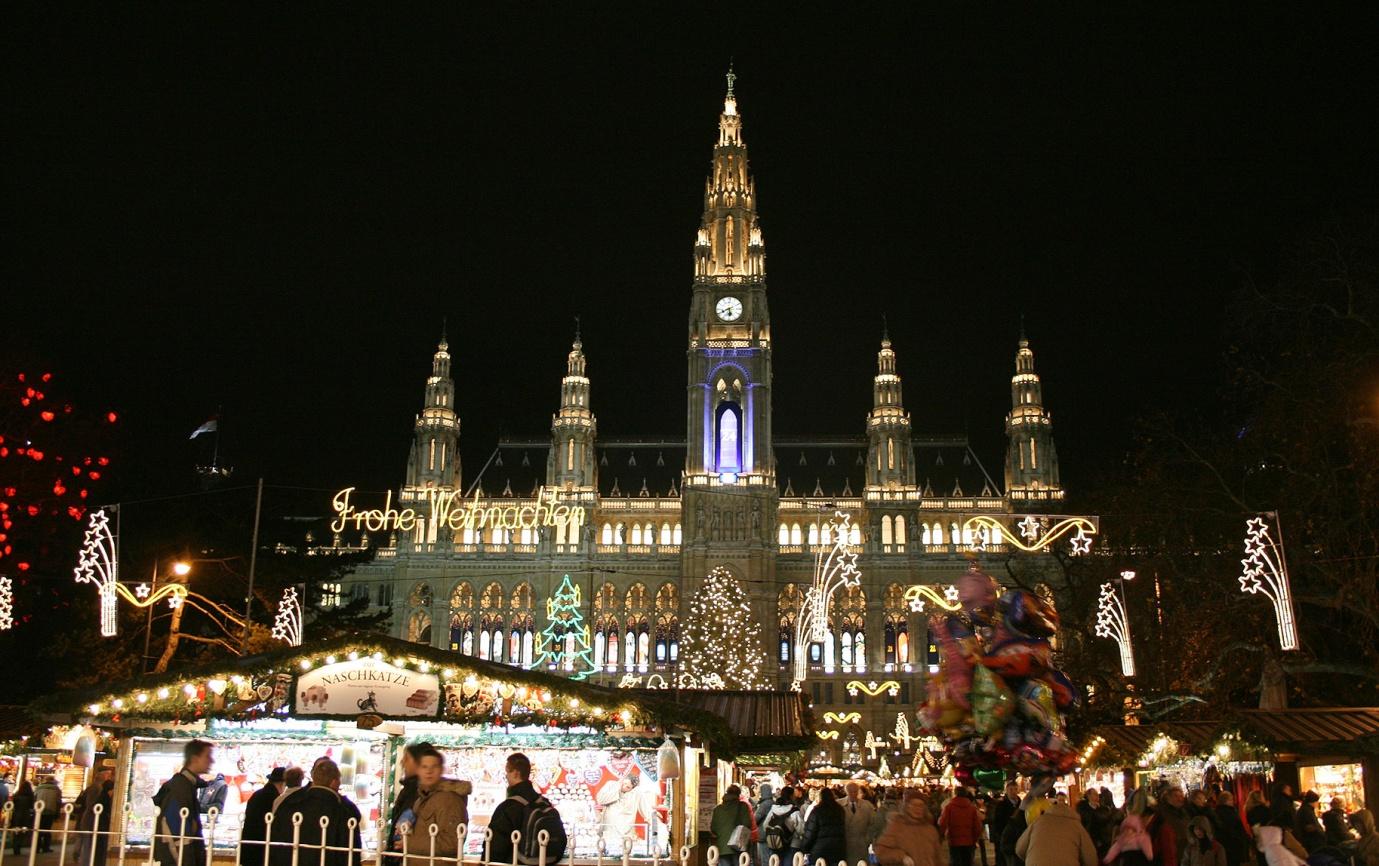 The twinkly beginning of Christmas celebrations

Christmas descends early on Austria. It was only November 12th when the first Christmas Market went up next to the Rathaus (see above, I feel it resembles a festive version of the Little Mermaid’s palace). I’m the kind of person who starts listening to Christmas carols in September, so I haven’t been consumed with rage at commercialism and consumerism taking advantage of a religious holiday, but it does still feel slightly premature; I even ate some goose this week.

Christmas markets (or ‘Christkindlmärkte as I’ve come to know them) are fun. They’re kind of like glorified Christmas bazaars, except you get the feeling that here in Vienna they’re a Big Deal; I’ve done my research and the first one traces back to the thirteenth century. One that I went to was unfortunately lacking our usual British favourites such as a tombola and Splat the Rat, but the range of edible goods available more than compensated and it pretty much became a binging fest; toffee apples, pastries drenched in melted chocolate and chopped nuts, croissants the size of small (and sometimes even large) babies filled with meringue… the list is as large as my belly was by the end of the evening. My personal culinary favourite was, however, Glühwein. Glühwein is a lot like mulled wine, apart from the fact that it has a much higher alcohol content. I remember drinking mulled wine when I was quite young, but I think giving this stuff to a child may be illegal, although there is the family friendly alternative, Kinderpunsch. There are about a million different Glühwein variations; it is very sweet and tasty and comes in all sorts of flavours: from apple and pomegranate, to coconut. It is served in a festive mug that you unfortunately have to pay a deposit for, but certainly forms the hub of activity for these markets. Glühwein drinking as an integral part of Viennese life is a definite perk of the sudden drop in temperature. Apart from that, they tend to include stands flogging the following, in no particular order: honey and honey related products, snow globes, clocks, incense, hats, themed hats, nothing but baubles, heart shaped biscuits for that special someone and, without fail, tackiness in abundance.

It’s not just the markets that signify Christmas coming early in Vienna. Obviously shops are already full of yuletide bargains and the like, but the whole city is decked out in wreaths and fairy lights, some of which are constructed to looking like quickly melting icicles. The weather made the transition from mild to ice-cold virtually overnight and it suddenly feels like winter, making the seasonal feeling all the more appropriate. The way in which Christmas is stretched out in mainland Europe has, I have deduced, something to do with the fact that they start officially celebrating so much earlier here as Catholicism is still very much alive and kicking, and in Germany and Austria Advent is given much more importance than in the UK. As far as I was concerned, Advent means eating a bit more chocolate every day but here it is apparently more keenly observed (one of my flatmates suggested we all go for regular Advent brunches a while ago. Brunch seems to be another Big Deal in Austria), meaning that the first festivities in November aren’t really that early.

It’s so pleasant being here at this time, because it’s so beautiful to look at and there are so many Christmas activities. However, if there’s one thing that makes you think wistfully of home it’s Christmas time. There’s a significant absence of Christmas carols and the fact that it’s a time to be spent with family does not go unnoticed. I desperately want to hear some Shakin’ Stevens or even “Deck the Halls” but I just don’t see it happening. I’ve really enjoyed all the Christkindlmärkte I’ve been to so far (quite a few considering it’s only just November, which actually does feel slightly wrong…) but it won’t really feel like Christmas until I set foot in England again for the first time since coming abroad.