For Those Who Want A Post-Halloween Scare 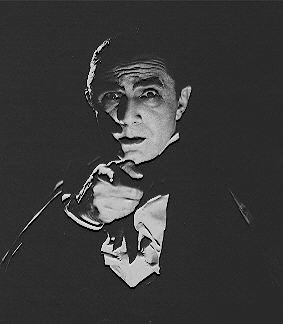 Your Count needs you!

Horror films in the silent era had their limits as far as subtlety went. They couldn’t do creepy music, footsteps, strange breathing. So, it was with the advent of sound in the 1930s that we start to see horror movies make their mark. Monsters and murderers no longer had to stand on screen looking vaguely menacing for the audience to notice them, and plots started to become more developed. Early horror films were mostly set in distant lands and times, where men in cloaks with thick accents waited to pounce. The greater technical effects available enabled the creation of two horror powerhouses, Bela Lugosi as Dracula (1931) and Boris Karloff as Frankenstein’s monster (1931), whose influential performances you’ll at the very least know through their parodies. With an unsurprisingly large amount of the national budgets of Europe going to World War Two in the 1940s, Hollywood dominated horror film production. These films continued to stress how scary the rest of the world was, with monsters standing in for war as reasons for not leaving America. Even then you weren’t safe. Go somewhere as seemingly innocuous as Wales, you might end up as a werewolf (The Wolf Man, 1941). Alternatively the horror could strike at home; marry a Serbian instead of an all-American girl and you really only have yourself to blame when she turns out to be a cat monster (Cat People, 1942).

The 1950s saw constant fear of nuclear war. This meant one thing – monster movies from the likes of stop-motion master Ray Harryhausen; films about science, bombs and technology that goes too far. This was the age of horror B-movies, where quality became less important as they mainly targeted teenagers. These movies were about action; comprehensible plots and realistic monsters were strictly optional. 1954 saw Ishiro Honda making the first kaiju (roughly ‘giant monster’) movie – Godzilla. Yet it’s rather more solemn watching a film about a monster mutated by nuclear radiation destroying Tokyo when you consider Hiroshima and Nagasaki had been obliterated by nuclear bombs less than a decade before. The message you get from all these films is about not playing God.

The 1960s saw the sexual revolution, cults, the rise of acid and a lot of other things that had people terrified, while the 1970s saw a general malaise. Horror had come back home. It was no longer the atomic monsters or the creepy foreigners you needed to look out for. George Romero’s Night of the Living Dead (1967) helped make the zombie genre what it is, but is ultimately an indictment of everything he saw as wrong with American society. The breakdown of the family pervades these films; you can’t trust your spouse (Rosemary’s Baby, The Shining) or your kids (The Omen, The Exorcist). This period was also seeing the economic recovery and growth of cinema in other countries – the horror scene was becoming more varied.

The 1980s were when an ability to create better special effects and the need to keep shocking audiences caused the emergence of the ‘slasher’ film. A Nightmare on Elm Street, Child’s Play, Friday the 13th and so on had one unrealistically strong psychopath killing loads of people in pretty graphic ways. Horror movies were as explicit as possible, and were appealing specifically to horror fans through endless sequels. So, what were directors in the 1990s to do but turn away from supernaturally strong and comically OTT murderers, and start going for more realistic serial killers? Silence of the Lambs, Scream and Se7en brought the horror home to us. The bad guys weren’t going to get us in our dreams, but they were smart, they could be charming and they were real. Their humanity was what made them terrifying. Then at some time after the millennium, we decided that we’d seen it all before, and thus rose the ‘torture porn’ genre. Heavy on torture and nudity, light on plot. You know the kind: Hostel, any of the numerous Saw movies, The Human Centipede. Movies that you watch with friends and then have no desire to ever re-watch. Film-makers also started to remake older horror movies like their lives depended on it. But it’s not all doom and gloom. Zombies made a huge comeback, from Shaun of the Dead to the Resident Evil films. There’s been a huge rise in foreign horror movies reaching our screens: k-horror (Korean) and j-horror (Japanese) are two of the big ones, giving us strange ghostly girls and psychological breakdowns (The Ring, Tale of Two Sisters).

At the end of the day, horror films are like the best monsters – they just refuse to die. The horror genre adapts to each generation’s fears. It used to be technology could save you, now your mobile phone and TV can be haunted. Zombies used to be the shambling undead raised by voodoo. Now they’re created by contagious super-viruses. Monsters may not be made with atomic bombs any more, but toxic waste dumping and other eco-crimes are doing the same job. Vampires are still hanging out in our bedrooms, but now instead of wanting us as their undead brides, they’re… Actually no, wait, they still want to marry us but now that’s romantic. Apparently.

Here are a couple you might want to give a go:

There will come a time in your life when you meet someone who does not like horror movies. It’s sad but true. This is a way to sneak one under their radar using a PG rating. This little stop-motion number from the director of The Nightmare Before Christmas oozes creepy atmosphere. A fairy tale about the dangers of getting what we want, the plot follows a young girl named Coraline who travels from the dreary, lonely world of everyday life to one of sheer magic; a world of talking toys, magical gardens, performing circus mice. Things seem perfect, but then there are the dead children, creepy dolls and button eyes. Coraline is a strong protagonist who does what most horror protagonists do not – she quickly learns to play by the rules. She doesn’t waste time questioning why this is happening or searching for help and quite frankly the fewer horror females constantly falling over and screaming, the better.

This one’s a suggestion for those who like their horror movies with plenty of laughs. The protagonists are two innocent hillbillies who, while minding their own business not dismembering, raping or murdering anyone, manage to end up surrounded by teenage corpses. A reaction to movies like The Hills Have Eyes, it flips the ‘murderous rednecks’ trope on its head. Sure, it all gets a bit ridiculous towards the end but it is genuinely funny to see Tucker and Dale’s actions from two perspectives – carving ‘WE GOT UR FRIEND’ into a log is a helpful message from our hapless duo, but seems a terrifying threat to the teenagers. The friendship between Tucker and Dale is genuinely touching, and I’m pretty sure there’s a message in there about not judging books by their covers.

Everything from their matching pale blond hair, their glowing eyes and their impeccably posh British accents screams that the children in this film cannot be trusted. These telepathic little monsters kill often without even seeming to even notice it. They are so powerful they have no reason to fear the adults. They remain eerily polite at all times, even when forcing people to kill themselves. A solid British horror and one of the few movies where it is entirely OK to be rooting for the children to die.