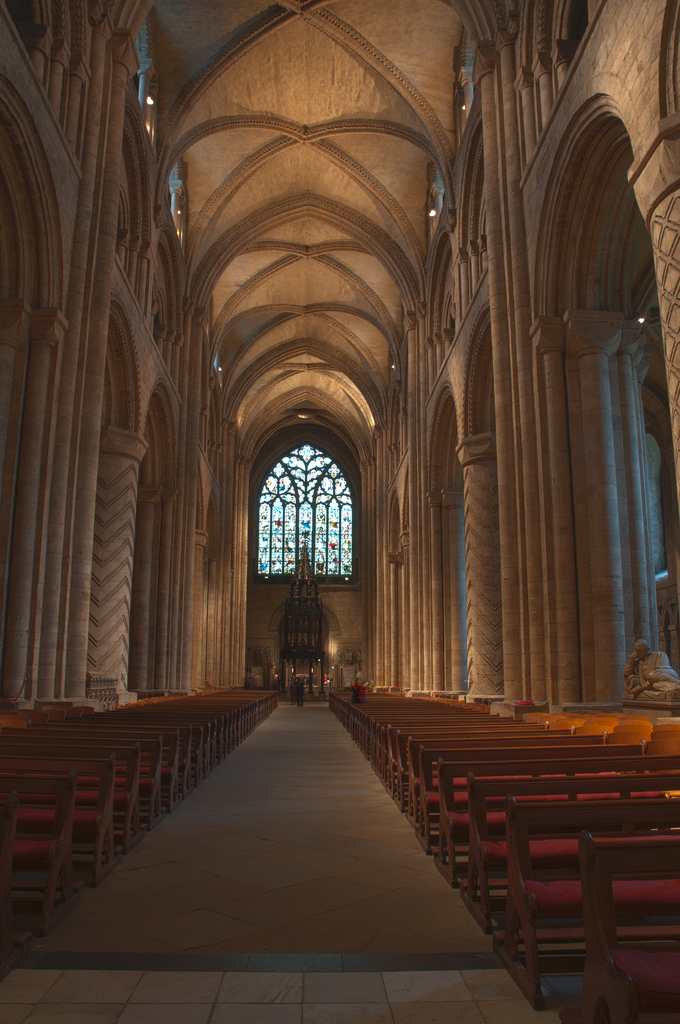 The imposing image of the cathedral greets many a nervous fresher

If we were to go on looks alone, I wouldn’t say there’s much doubt that Durham is the most beautiful of all the University towns. But in terms of first impressions, you have to go slightly deeper than the physical sights that lie on the surface.

In the three weeks I’ve been at Durham, I’ve heard a lot of people who have decided on a few personal rifts with certain parts of Durham life, like the long walk up the hill or, in the distinct case of a few members of my corridor, the lack of a McDonald’s, which is definitely the most common qualm I’ve heard since I arrived. Neither these, or any other niggling faults, have bothered me at all. I’ve found the perfect home. Whether it’s a tranquil walk down the river to find some peace and quiet in the days, or the buzzing (if slightly limited) social scene which I’ve tried to fully throw myself into at night, there’s something here to sort out pretty much anyone’s interests.

I’d heard a lot before coming here about the Town/Gown divide in Durham, but I’ve experienced nothing of the sort. In fact, the local community has been fantastic, helping me out when I needed it, being generally friendly and even going so far as to taking one of my friends home when he was lost in town. Coming from the bright lights of London, I expected to miss the variety of nights out, places to eat and the like, but I’ve found that Durham has everything I could possibly ask for, including the Grammar night at Fishtank, when I thought I was going to miss the indie night which had been a weekly fixture of my Summer.

In a nutshell then, Durham couldn’t have given me a better first impression. I’ve fallen for the city, the lifestyle, my college, my corridor and pretty much everything about this place. I took my first night in since getting here on the Tuesday of this week and let myself contemplate how lucky I was to be here, and how much fun I’ve had so far. What more this bubble holds for the Freshers of 2011 is yet to be revealed, but I know that whatever comes, it’ll be hard to top my first three weeks here. Keep living the life, and I’ll see you in Studio..

I’m not the average Fresher. I’m a 31 year old, part time post grad student who completed her bachelor’s degree via a distance learning institution. So in all senses of it, I’m abnormal, no wait, that’s wrong, well let’s just say I’m non-standard.

I’ve been at Durham for 4 weeks now and am really starting to settle in. My primary concern was that I wouldn’t be able to fit in because of all the above reasons which I had assumed would count against me but it’s just not happening that way. I’m overwhelmed by the vast diversity among the student populous and how many international students there are here. I’m currently attending two lectures a week and one of them is a mix of undergrads and post grads and the other is a mix of people from about twenty different courses so the diversity is truly mind-blowingly phenomenal. Ages seem to vary quite a lot too so my fears of being the granny in the class were allayed almost instantly and no one seems to have even batted an eyelid at me. I’ll keep using the Oil of Olay though just in case it’s that…

Being a part-time student, I had decided even before matriculation that I wanted to try and get a bit more involved in student life. Only being here twice a week could potentially allow me to become invisible and never really be part of the campus, and having studied with a distance learning provider prior to starting here I knew I wanted to take full advantage of the opportunities presented by a campus-based institution. So far I’ve managed to see some student theatre, join Butler College (part time students don’t get the option to join a college on enrolment so I’ve had to make a personal request to join) and take part in the zombie flash mob on Halloween. It’s too easy to get involved in things here because there’s so much going on. I’d be in real trouble if I were a full time student because I’d be doing something every night and would struggle to find the time to study!

Thus far I’ve had nothing but good impressions of Durham. Aside from a minor misunderstanding with someone who I don’t think believed I was really a student everyone I’ve come across has been willing to chat to me and accepted me as one of the clan. I can only hope this continues. The full-timers have already begun to form their cliques and I haven’t been able to go to any college events yet so I can only hope I’m not too late to join in. It’s strange being alone in the swarm. It’s like being single in a room full of couples. You just want someone to talk to and enjoy the party with but everyone else already has someone to do that with. I’ll just have to be more confident at introductions.