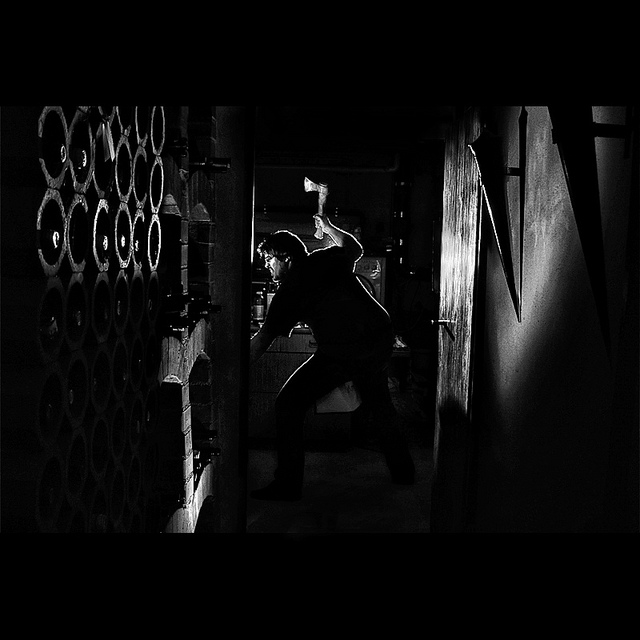 When black and white got tense…

Film noir refers to a range of crime films with strong roots in hardboiled detective fiction. Most early film noirs had low budgets and lacked already established screen names to bring in viewers. But, it left the directors and cinematographers able to experiment; for example, tinkering with traditional narratives by using flashbacks to change the order the plot unfolds (which became common in noir films), and a voiceover narration which gives these films an almost documentary-like feel (while making the audience question just how reliable their narrator is). Many noirs purposefully used low-key lighting, manipulating light and shadow, and created awkward or distorted camera shots to create a bleak visual effect and add an element of the surreal and secretive to proceedings (for example, Lady in the Lake is shot entirely from the viewpoint of the main character).

The films form a sceptical contrast to the kitsch melodramas and romantic comedies that were most popular in this period. Despite censorship of what could be shown on screen (the Hays Code prevented films having a character who remained unpunished for murder or who shared a bed with someone they were not married to), film noirs dealt with more risqué theme, like brutal violence, gritty everyday life and sex, in a way that most other films avoided. For example, in The Big Sleep, a photograph of a woman in a Chinese dress sat in a Chinese chair hinted to the contemporary audience that she had been involved in pornography. This more pessimistic attitude is often linked to the feelings of social anxiety, alienation and paranoia that plagued American society in the post-war period, especially in the 1950s with the beginning of strong domestic, anti-Communist hysteria (some even dealt with internal Communists e.g. Pickup on South Street).

It is difficult to define exactly what falls into this category of films. They are known for their convoluted story lines and purposeful attempts to mislead the audience as to the sequence and significance of events. They are mostly set in urban landscapes, but anywhere seedy dealings can occur will do. The main character, whether an investigator, criminal or cop, tends to be cynical, street-smart and have a nose for trouble; they are anti-heroes, for while we support them, we see their moral failings and flaws as clearly as they see those of the people surrounding them. Often there is a femme fatale lurking in the shadows, a mysterious woman who uses her sexuality as a weapon to get what she wants, often leading men to danger and destruction (Double Indemnity, The Maltese Falcon). Even if the femme fatale was not present, this was the genre where it became common to show females with lose morals or engaged in criminal behaviour and these ‘bad girls’ are not always the villains of the films. Most characters are morally ambiguous and have something to hide, which explains why the investigation of a crime (often murder) is one of the main events in most noir plots. Because of this, betrayal and suspicion are a given, and every character – even ultimately the anti-hero, who has been fighting for justice and resolution – is left isolated from those who surround them and society in general, because their ability to see the darker side of life sets them apart from the ‘real’ world. As such, noirs tend to have bleak, or at the very least ambivalent, endings, though sometimes characters are given a reprieve at the denouement of the film (The Big Sleep). Though what we now recognise as ‘classic’ film noirs were made mostly in Hollywood during the 1940s and 1950s, works that parody (Who Framed Roger Rabbit?), imitate (Chinatown, Taxi Driver) or use tropes of noir films (Blade Runner, Memento) continue to be popular to this day.

Gilda (Charles Vidor, 1946) – A film that perfectly illustrates the brutal, messed-up relationships and isolation that characterise noir, while being one of the few that allows for a happy ending. The plot follows small-time gambler Johnny Farrell (Glenn Ford) whose boss marries Gilda (Farrell’s old flame), who flicker constantly between love and hate, both choosing the actions that they know will cause the other the most pain, simultaneously punishing and almost destroying themselves. Gilda is herself the ultimate femme fatale, a blonde bombshell with a killer wardrobe who isn’t above giving a striptease to a roomful of strangers if she thinks it will get her what she wants. Yet, the two characters still manage to keep the sympathy of the audience for their loyalty and their love, despite how twisted this becomes. The chemistry between the characters practically sizzles and it’s no wonder; in the scene where Gilda smacks Farrell twice across the face, the smacks actually broke two of Glenn Ford’s teeth.

Brick (Rian Johnson, 2005) – A plot-heavy neo-noir film with a cast of mostly unfamiliar faces and a strong lead performance by Joseph Gordon-Levitt ((500) Days of Summer, Inception). The dialogue is quick-paced, occasionally humorous and complex, drawing on the hardboiled detective stories of Dashiell Hammett. The transportation of the mean underbelly of the streets into a high school setting doesn’t feel forced and the characterisation of the various cliques is believable the gritty realism is added to by a quick production process (20 days to shoot it) and very few special effects. The plot follows a student slowly unravelling the events that led to the death of his ex-girlfriend, facing vicious drug dealers and uncovering dark secrets. The film scorns over-sentimentality; with an ending that leaves you cold and Gordon-Levitt managing to add an emotional undercurrent to the determined cynicism of his character.