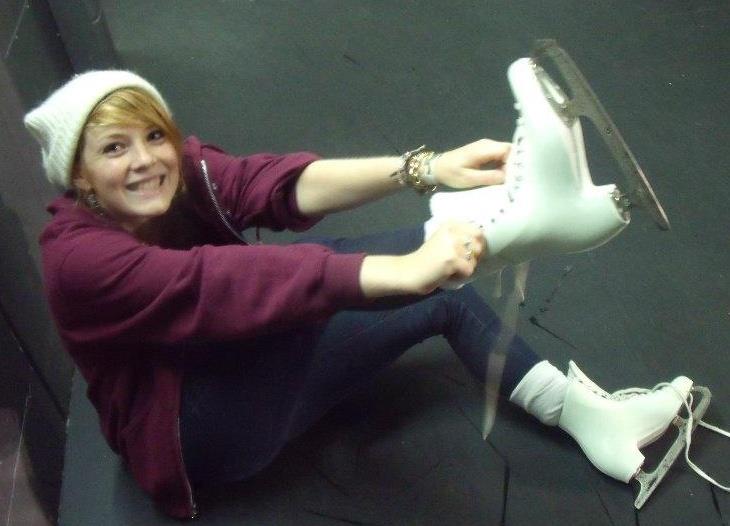 ‘1) Get fit.’ Not a novel thought or notion, but one that once again has inevitably appeared on the agenda. Having decided long ago that scales were not a legitimate measure of shape, and deciding that the classic belt notch or the fit of a pair of favourite skinny jeans was just too inaccurate, I instead opted for the tape measure. I quickly jotted down my measurements in a notebook amongst endless other lists of things to do, to buy and to achieve. Bum, waist and boobs, with an absent minded scribble next to the latter, ‘Don’t shrink!’

‘2) Ice skates – UK 5= CND 7.5 2) ski jacket…’ With an Olympic ice rink on campus and Whistler already getting a thick snow cover, I decided that when in Canada get fit how the Canadians do. So, with yet another shopping list scribbled into my notebook I headed for the thrift store (aka charity shop) to see what treasures I could uncover amongst the jumble. Being an experienced charity shopper I knew my stuff, but unfortunately my instinct is to go for pretty, not practical. Consequently as I hesitantly displayed my white-leather ice skates and brash red ski jacket to some friends I was shocked how impressed the experienced skiers were; by pure fluke I had picked up a Whistler ski instructor’s jacket!

Having never skied before in my life I am now kitted out in professional equipment but with zero skill. I have images in my head of trails of children mistakenly following me around the slopes wandering why their instructor is on her bum more than they are. Perhaps it will come across as a more empathetic approach to instructing. Or, alternatively, I am terrified of being misguidedly directed to an ‘off-piste black run’ and having a Bridget Jones-like moment as I career down the slopes, straight through the crowds and into the village shop, still fully kitted out in skis.

As for ice-skating my snazzy figure-skating blades have the same deceptive effect. This is not helped by the fact that it seems walking on land in ice skates forces you to do quite a swagger. So, as I unintentionally strut on to the ice onlookers seem immensely amused that instead of pirouettes, splits and leaps I awkwardly edge around the rink doing some bambi-like jerky movements as I frantically attempt to keep my feet closer to the ice than my face.

‘3) Cross fingers and compare measurements…’ A week or so later and with a slightly bruised bum and ego from ice skating (the ski season has yet to start) I optimistically go to measure any weight loss. Suddenly I realise that I left my notebook in the thrift store when trying on skates. Enquiring behind the charity shop desk about my notebook the pimply, youth excitedly replies, ‘Oh so you’re Vee Lockey, I assume you made it on exchange then eh? Got all your visas and accommodation sorted out then?’ After quizzing me on detailed knowledge of my life he then goes on to reveal that he has taken my notebook home and read it cover to cover. I abruptly become acutely aware of my final comment scribbled next to my measurements, ‘please don’t shrink!’ Lesson learnt; my life is not like Bridget Jones’s, my fitness fads may be equally frequent but if I hurtle down a ski slope I am bound to break a bone not a ski time record; and unfortunately when someone accidentally ends up reading my notebook it is not Colin Firth but instead a spotty teenager.