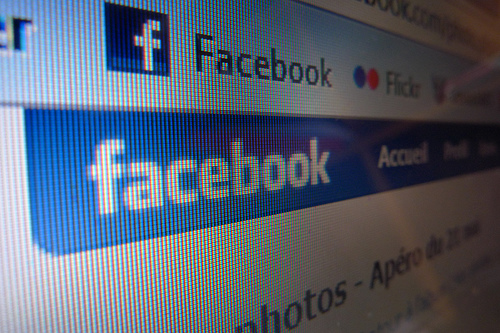 Leave your soul at the login page.

The subject of Facebook came up whilst I was making small talk with a neighbour a few days ago. “It’s so bad how addicted I am,” I confided, expecting an “mmm yeah…” in reply. “Yeaaah me too, it’s awful. I HAVE to check it once a day!” returned my new friend.

“Shit,” I thought. I realised that I don’t think I could actually name the number of times a day I refresh (because it’s generally open in the background) that damn site, and if I had to estimate, I’d say it wasn’t so far away from the number of times a day I blink. WORRYING. This revelation came soon after someone else told me recently that you spend 10 years of your life watching TV and I thought to myself “Nah, I definitely spend that time on Facebook…”

Thing is, we joke about things needing to be “Facebook official” but it’s true. If it’s not on Facebook it didn’t happen, and we use this site to prove that we have lives, to validate them, to boost our egos (come on, who really has 600 friends?!) and to avoid various unpleasant/awkward/annoying situations that otherwise we’d have to deal with in reality.

At the end of summer term I finally got together with a guy I’d liked from afar for most of the year, only for things to fizzle out because he was a 3rd year and has now left Durham for the big wide world. He told me that he’d liked me since he first saw me (n’aww) last September and admitted that things could have been completely different if he hadn’t Facebook stalked me and, seeing my profile picture was me being piggybacked by a good looking young man, thought “Huh, she’s taken” and moved on. Firstly, the boy in the picture happens to be my brother, and secondly, since when has a glance at someone’s profile (which is set to private, by the way) been a substitute for actually digging around for the goss on whether they’re single/slutty/heterosexual?! However, I was more worried by the fact that my first thought, on learning that a potential relationship had been thwarted by his dippy mistake, was not distress at a lost love, but “Well, he’s clearly a crap Facebook stalker”.

I’m not proud of this, but I could win awards for Facebook stalking/general Facebook know-how. I don’t mean technicalities and hacking or whatnot, just straightforward voyeurism and nosiness. Sometimes I forget what people have told me and what I’ve found out through stalking but other than such little slips I’m a master of Facebook etiquette – if there was a module in it (maybe there could be next year, to get us more publicity after the hysteria about the Harry Potter module has died down) I’d get a First fo sho.

I didn’t even realise there was a Facebook etiquette until I commented to a friend (about a girl I vaguely know) “Urgh, yeah, she’s always popping up on my news feed and commenting on EVERYTHING in a really annoying way.” “Just because she doesn’t have the Facebook etiquette down doesn’t mean she’s a bad person,” my friend replied, very rationally, and I immediately felt guilty, and like a massive loser. Although having a better grasp of Facebook etiquette makes me cooler than her on Facebook, this girl is probably cooler than me in real life because she’s obviously spent less time stalking/wasting away her youth. And if it’s a choice between Facebook-cool and cool in real life, I know which I’d prefer.

Because there is definitely a difference between your image online and in reality. My profile may suggest that I’m a normal, rational person, not an addict, but that’s simple because it’s contrived to give off this impression.

The terrifyingly large amount of time I’ve spent on it has taught me what’s cool and what isn’t, and though I’m a world-class stalker I know to do it stealthily – comments on the things you stalk must be VERY rare, and with an “oh, this popped up on my homepage” disclaimer.

This brings me onto photos. We’re told that a picture’s worth a thousand words, but is it worth a whole night? We’ve become so obsessed with recording events that we enjoy the post-party Facebook albums more than the parties themselves – the party looks so much better in the photos when there’s no photo evidence of the geeks that you don’t want to be seen with, or the awkwardness in the room before everyone got wasted.

The social-network-savvy student uses particular techniques to ensure regular tagged photos of them but minimal appearance of vanity. They will either get someone else to take photos of them (with friends, or just hot/cool acquaintances) on their camera, or will jump into as many photos taken by other people (on other people’s cameras) as possible. The latter is preferable because there will be proof of your raving life/hot dress/hot friends, without you looking vain and photo-obsessed – you’re merely humouring someone else.

This vanity appears again in wall posts – an utterly bizarre concept, when you think about it – which are effectively public e-mails. You wouldn’t click “send to all” when you send an e-mail to one friend, so why are we so happy to have our personal messages published on everyone else’s homepage? The knowledge that the world and his wife can see your conversation leads to incredibly self-conscious wall posts, often stating unnecessary things in order to publish more information about the sender’s fabulous life, without them needing to write it in their status.

Someone who doesn’t worry at all about Facebook lameness is my sixteen-year-old sister – your stereotypical Facebook freak. Much as I love her, her online antics make me want to shrivel up in embarrassment and deny that we share any genes. She posts statuses about four times a day, advertises her drunkenness in any way possible, creates photo albums starring her (and only her) and “likes” everything under the sun, including one page called I am the cooler sibling (CLEARLY incorrect). She and most of her friends have also joined a group whose name goes something along the lines of I’ve got enough friends, I want a BOYFRIEND now. Desperation station.

BUT although all this is beyond the realms of cringe it’s all OK, because they are STILL TEENAGERS. They’re allowed to be attention-seeking weirdos. The really cringe thing is that us (nearly) adults haven’t moved on from this teenagey vanity, which nurtures insecurity, comparison of your life with what you perceive others’ to be, and an obsession with appearance. We criticise particular statuses (e.g. “Molly Brown can’t stop crying”) for being blatantly attention-seeking, but remain oblivious to the fact that all statuses are attention seeking (we wouldn’t post them if they weren’t read). Likewise, we consider the MySpace culture of self-taken photos to be hugely out of date, whilst refusing to admit that Facebook is just another version of the same thing.

Despite my hatred of it, sadly I think it’s pretty much impossible to have a (normal) life at uni without the book of faces, now that it’s become vital for social events and general communication. The scary thing is whether and/or when we’ll ever be able to delete our accounts. Will our generation still be tagging photos of friends in the local in our seventies (walking sticks in hand), posting statuses about our new curtains and uploading pictures of stairlifts with our iPhones? The Facebook freaks will live on and on…