F is for Funeral 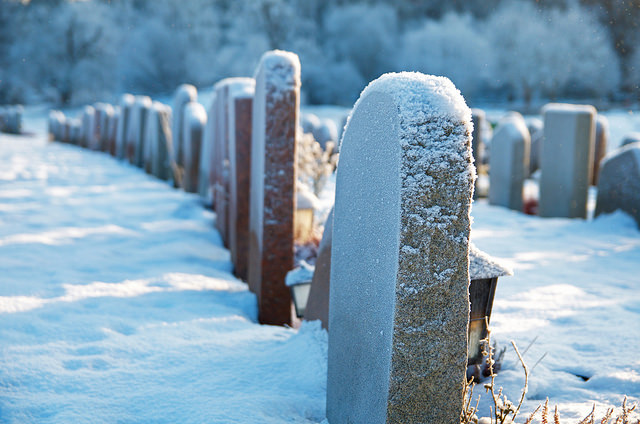 The ceremonies for a dead person prior to burial or cremation; obsequies.

There was a time in my life in which I was obsessed with whodunnits. I preferred Agatha Christie to anyone else, so I ended up reading a lot of Miss Marple and watching a lot of the televised adaptations of her stuff. As most of you know, people tend to die in detective novels. In the TV adaptations of the stories, there is almost always a part that shows the funeral. It always starts with “Dearly beloved.” People in black throw dirt onto the coffin. The priest says some words: often something along the lines of “ashes and ashes, dust to dust”. These scenes seemed alien to me when I was younger.

For a long time, my only experience with funerals was through television shows. However, right after my finals in high school, I went to my first one. My grandfather had died. He had been ill for a long time, so no one was really that shocked by it. One of the things I remember is the sound of my aunt saying “That isn’t my father” after we saw his ashes get swept up into a crate, which was then handed to one of my cousins. One of my uncles had nudged me forward, right in front of the window, so I could see the people sweeping up my grandfather’s ashes. It wasn’t a fun three days. Ever since, I’ve tried to steer very far away from them. Sometimes, however, you just can’t.

It was a Saturday. I was getting ready to go outside to meet a good friend of mine. We were going to go see an exhibition – Jean Jacque Sempe’s. After meeting her I was going to go see two plays that I had fallen in love with. It was going to be a great day. A few hours later I was standing in a hospital room, watching my father’s side of the family cry over my grandmother’s body. A few minutes after that, I was sitting on the floor of the place I would stay for the next three days. Everything was happening so quickly. People came to pay their respects and left, only to be replaced with another wave of unfamiliar faces that I had to register. My cousins and I were bored most of the time, so we started playing games and talking to one another more often. Sometimes I almost forgot why I was sitting there, but then I only had to look down at the black clothes that I was wearing to remember that we weren’t here for fun.

But in all honesty, sometimes during a funeral you do forget why you’re there in the first place. It just seems like a place to meet people, to catch up with the relatives you never get to see otherwise. You forget about the tragedy; you forget about death. You only remember when you see the next person come in and start crying. You remember when you see the people your grandmother used to be friends with. You remember when another relative comes and hugs your aunt, and your aunt promptly bursts into tears.

Death has become a concept that is not too foreign. People die all the time. In real life, between the pages of a book, in the short running time of a movie – people die. It’s a fact. But it’s the aftermath and the process of it that hurts more. Funerals are there to remind us about this – if we didn’t have these ceremonies, saying goodbye would be a very different experience. And even our ancestors seemed to know this; why else would people discover Neanderthal skeletons with layers of flower pollen? Why else would pyramids exist? Why bother with that long, prolonged process of making objects and monuments to remember people? Is it that important to remember?

One of the joys of being a human being is that we forget. We forget about so many, many things. We forget things that we hate, we forget things that we love, we forget things that are both important and unimportant. Normally, that is a blessing. You can’t hold on to everything forever and expect to remember everything. However, when it comes to saying goodbye to someone, sometimes we do everything we can to remember. We need people to remind us of what kind of person they were. We need to be reminded that there are people who remember her, him, whoever they are. We need to be reminded that not only were they loved, but that we are as well. Maybe that’s why we prolong the process- the rituals, the rules, the various things one has to do.

I don’t suppose a lot of people like funerals. I certainly don’t. It isn’t comfortable, to be constantly reminded of death and dying. But then again, we have to. In all honesty, sometimes we just have to.