Ex-Premiership Teams: Where Are They Now? 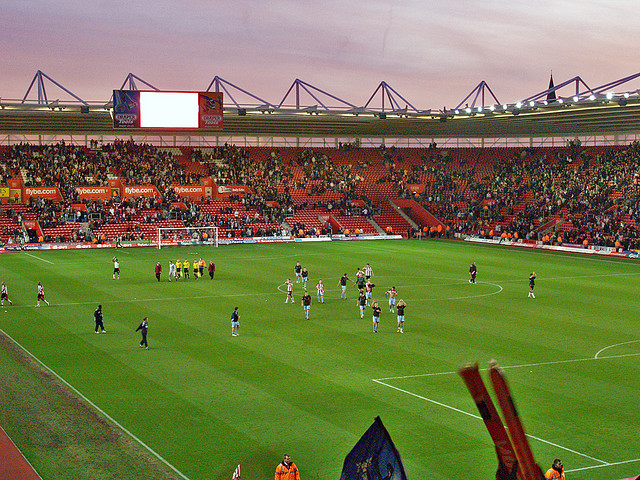 The old legends may yet make a return.

Leeds United vs. Southampton. A decade ago, it was an entertaining Premiership match that ended 1–1 with Fabrice Fernandes cancelling out Harry Kewell’s effort for the home side. Also on the pitch that day were Paul Robinson, Alan Smith, Robbie Fowler, Wayne Bridge and Rory Delap. Last weekend, the same fixture was played out in the Championship, this time Southampton taking the spoils after a sole strike from Rickie Lambert. The teamsheet last weekend unsurprisingly featured none of the high-profile names of the former game, showing that reputation simply isn’t enough to attract star players and keep you in the top-flight anymore.

Southampton may be looking to promotion back to the Premier League this season (they currently sit top of the second tier), but Leeds, in 10th, are on less firm ground. They’re not the only ones: hoards of former major teams are currently languishing in the lower tiers of English football. West Ham and Middlesbrough may be fighting for promotion in the Championship, but they’re not typical cases, as can be seen through the examples of Charlton and Sheffield Wednesday. It was not so long ago that they were competing against the big boys in the top-flight; now they’re battling it out in League One (football’s third tier).

Some fans may have given up on their side, but the numbers are encouraging: considering that Leeds United have not been in the Premier League for eight years now, having been through numerous twists and turns since then, it is heartening that the club can still attract over 20,000 fans to its latest fixture. West Ham is faring even better: their most recent home game was attended by almost 35,000 fans. Compare that to the 19,000 that watched Wigan Athletic beaten by Swansea in the Premier League last Saturday, and it’s easy to see the point of some football fans. That is, that teams like Wigan, with a rather small fan base and little in the way of any historical legacy, currently (albeit perhaps not for long) sit in the top tier, whilst clubs with incredible histories like West Ham and Leeds can be caught in the Championship.

The sad truth is that many clubs with – to use another trite footballing cliché – rich heritages currently ply their trade outside the top league. Countless examples can be made. Many students may remember the days when Wimbledon and Bradford fought it out in the Premiership, seemingly not so long ago. This season, both are struggling to meet their mid-table ambitions in League Two, only one step above the Conference. Perhaps worse for older football fans, former European Cup winners Nottingham Forest are in danger of relegation to League One, something which would have been unthinkable only a decade or two ago.

But ten years is a long time in football, and the game takes no account of tradition or history when it comes to kick off. Hence, teams have to avoid mindless overspending whilst bringing in experienced players to stand any chance of acceding to, and staying in, the Premier League. One bad season is all that’s needed to send a team down, and from there the route back up is far easier said than done. Whilst many teams expect to bounce straight back, it can take years for even the best teams to rejoin the Premier League pack, and as with many of the clubs mentioned above, there are a host of clubs still waiting to enjoy any of the success they had been accustomed to.

But it’s not all doom and gloom. Leeds may be a dramatic example but they’re not a representative case; for every Leeds there is a Newcastle United – another huge club that dropped out of the Premier League three years ago, but now sits comfortably in the top six of the first tier. The famously loyal Toon army never deserted their beloved club, and their support helped yo-yo the team back into the Premier League at the first time of asking. Of course, the fact that many of the best players stayed on, and the efficient management of Chris Hughton didn’t hurt either.

The Newcastle case, in addition to the Leeds vs. Southampton game last weekend, serve as useful reminders that many of the biggest clubs from years gone by have not gone on to the great things of, say, Manchester City – relegated to the third tier in 1998, today bankrolled to first in the country by rich owners. Teams such as Middlesbrough, West Ham and Southampton will probably be back in the Premier League in the next few seasons. Others, like Nottingham Forest, Sheffield Wednesday and Wimbledon, may not be so lucky. But the fans shouldn’t give up hope that their dreams of top-flight football may be achieved at some point. Fans across the country would be glad to see these big names back where, for many, they truly belong.