Having successfully avenged Julius Caesar’s assassination in 42 BCE and defeated rival Mark Antony at the Battle of Actium nine years later, after almost two decades of civil war in which Rome had been reduced to a state of lawlessness, Gaius Julius Caesar Octavianus became the unchallenged ruler of the Roman world…

In 27 BCE, the Senate granted him the honorific titles of princeps (the first citizen) and Augustus, whose derivation from the Latin words, ‘augere’ (to increase) and ‘auctoritas’ (authority) would come to symbolise the augmentation of the Empire under his 41- year reign and the singular authority he imposed over the Roman world. The transformation of Octavian to Augustus was more than just a name change, however, as, having seen how unpopular his merciless treatment towards surrendered enemies during the Civil Wars was, he instead chose to pardon many of his former enemies after the Battle of Actium. 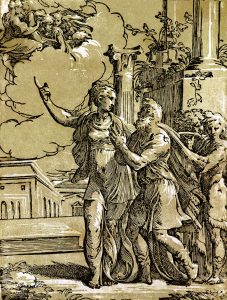 Augustus claimed to be restoring the Republic to the Roman people,  giving up control over the provinces and the army, and re-introducing free elections. However, all of these concessions were strictly ceremonial as the power to appoint the governors Rome’s newly conquered provinces rested firmly in his hands, as did the loyalty and supreme command of all ranks of the army, in what was essentially a military dictatorship. Additionally, Augustus and his family possessed a unique monopoly of glory, reserving triumphs and the funding of public games for the imperial family, depriving republican candidates of popular support and perpetually swinging elections in the Emperor’s favour. However, keen to not repeat the errors of his adoptive father Julius Caesar, Augustus was careful to not alienate the nobility too much, instead transforming them into courtiers who would make key political and military decisions under his supervision, while also incentivising their loyalty by keeping their political advancements dependent upon him.

Domestically, Augustus established a firefighting service of 7000 freedmen and a police force of 3000 referred to as the vigiles and the cohortes urbanae respectively. The Praetorian Guard was also introduced as the Emperor’s bodyguard, accompanying him on active campaign and being employed for crowd-control within the city. Just as Augustus boasted in his public last words of ‘I found Rome of clay, and leave her to you of marble’ (Suetonius, Augustus 28), the limestone of the Republican-era Forum metamorphosed into gleaming white marble and became replete with statues of Augustus in full military uniform, inscribed with his various accomplishments.

Under the patronage of Maecenas, an important political advisor and something of a propaganda minister, this re-establishment of structure and the architectural glory of Augustan Rome became immortalised in the authors of the Golden Age of Latin Literature he presided over. This is especially evident in Virgil’s Aeneid, which established divine ancestry for the Julian family that Augustus was adopted into and referred to Augustus as ‘the son of the deified’, promising that ‘he will bring a golden age again to the ploughed fields of Latium’.

This reconstructive attitude was also evident in the social legislation Augustus enacted, believing the fundamental cause behind Roman instability for the past few decades to be an erosion of moral values. For this reason, he introduced the leges Juliae (the Julian Laws) to enforce traditional morality and encourage marriage amongst the upper-classes by threatening adultery with exile. Even the Emperor’s own family wasn’t exempt from the enforcement of this law, with Augustus’ daughter and grand-daughter exiled on such grounds. Another factor that he believed to be key to the Civil Wars that preceded his rule was factional rivalry amongst nobility. To address this, Augustus set about securing the stability of the Empire through the establishment of a dynasty. His adoption into the Julian family by Julius Caesar and his marriage to Livia Drusilla (the mother of future Emperor, Tiberius) from the Claudian family united the two patrician families as the Julio-Claudian dynasty, to which the subsequent four Emperors (whose lives I will describe in future articles) belonged.

With regards to his own succession, Augustus intended Marcus Agrippa, his close-friend, associate and son-in-law to succeed him, but after his death in 12 BCE, turned to his male children, Gaius, Lucius and Postumus Agrippa. With the deaths of Lucius and Gaius, in 2 and 4 CE respectively, and the exile of Postumus for unspecified reasons, Augustus finally turned to Tiberius, his step-son who would eventually succeed him after his death in 14 CE. Tacitus and Cassius Dio each cite rumours that blame Livia for killing him with poisoned figs but these have since been dismissed as likely being propaganda spread by factional supporters of Postumus.

The death of Augustus and Tiberius’ subsequent succession marked the start of a family dynasty that would rule over Rome for another 54 years, but the Principate he established would endure for another 358 in the West and more than a millennium in the East.