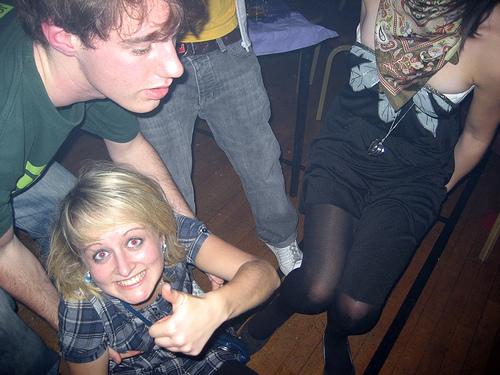 Falling over in public – one of many ways to humiliate yourself

It may not come as a surprise to you that I am a chronic “embarrasser”. I frequently slip, trip and fall for no good reason, say the wrong thing at the wrong time and do the wrong thing in the wrong place. One recent noteworthy incident was at my local gymnasium, since when my face adopts a certain shade of scarlet whenever I return. It was a simple mistake, where I merely assumed that the showers adjacent to the sauna both permitted nudity and were only for the use of male patrons. Suffice it to say, neither of these were true as I, and two rather distressed female yoga attendees discovered in a flurry of cock-cupping and towel-grabbing. I consider myself genuinely fortunate to have not been placed on some sort of “list” as a result of this incident, the current jewel in my crown of humiliation.

People deal with embarrassment in different ways; some laugh it off, some pretend it never happened, some cower in the corner of a public shower, praying not to be forcefully removed in their less than presentable state. What doesn’t change, however, is our ability to assume outrageous levels of mortification in front of complete strangers.

When in a public space, a major consideration before any action is frequently “how ridiculous could I potentially look if this goes wrong”. Carrying a coffee to your seat in Costa is particularly perilous, as is not immediately being able to find your table of friends when you walk out with your tray at brunch. There are those few painfully long moments when the whole room is watching you and instantly assuming that you have no-one to sit with, your social status plummeting by the second. The problem with this scenario is that whilst searching for your companions, you’re also trying to see who is actually looking at you, delaying the entire process and reducing your popularity to a level normally seen by people with tapeworm. This is of course a clear case of hyperbole for effect, as we all know that those sat in the dining hall on a Saturday morning could not care less about the time it takes you to sit down, as they are all far too preoccupied either stifling vomit or nervously discussing the contraceptive value of “pulling out”.

There is a café in Durham called Chapters, with a large float-glass fronting, frequently lined with “look but don’t touch” daddies girls, a veritable viewing gallery for the street outside.

Whenever I pass by, I become terribly self conscious, like when you’re meeting a date and you see each other from afar, so suddenly you become incredibly aware of how you’re walking and you don’t really know where to look. Furthermore, if I go beyond the café and realize that I’ve forgotten something in town, I will generally go without, to save walking immediately back past in the opposite direction, clearly looking like a moron. I know that I am not alone in this level of ridiculous self-consciousness, something that plays a far larger part in our lives than we often realize. The people sat there may well have a look, but unless you perform an epic faceplant or suffer that unfortunate moment when you cough whilst having a mouth full of milkshake, they are unlikely to even acknowledge your existence.

What struck me as I started to write this article was that, aside from the aforementioned accidental (but retrospectively, mildly enjoyable) public indecency, although my life is littered with moments of sheer stupidity, even I, the mortified party, struggled to recall most of them. They do not plague my day-to-day life, as not only do I seem to be so anxious about committing any more acts of doltishness, more importantly, other than in the exact moment when they are committed, they just don’t matter. Further still, I was once in a club when I made a wild (inebriated) lunge at a girl that I liked, in an attempt to show off my happy-go-lucky-don’t-give-a-crap dance style, and I simply floored the both of us. Hard. I was convinced that this was the end of any possible affaire d’amour, but when quizzed a week later, the female in question had to be pushed for a recollection. (Head trauma?)

What I’m trying to get at is that these moments of humiliation are exactly that. Moments. By and large, they lack any degree of longevity and are soon forgotten about by frequently disinterested onlookers anyway. It is incredible how much time we spend wrestling with “humiliation paranoia”, something that even if it does come into fruition, will be forgotten almost immediately. As a nation we seem far too preoccupied with how we appear to, and the opinions of, complete strangers. We have to remember that to be embarrassed is human and whilst it may produce a cheap thrill for insignificant others, it is only ever short lived. Unless you’re that kid who soils themselves in Freshers’ week. That’s for life.