DUCK: The Trials and Tribulations of a Tough Guy Volunteer 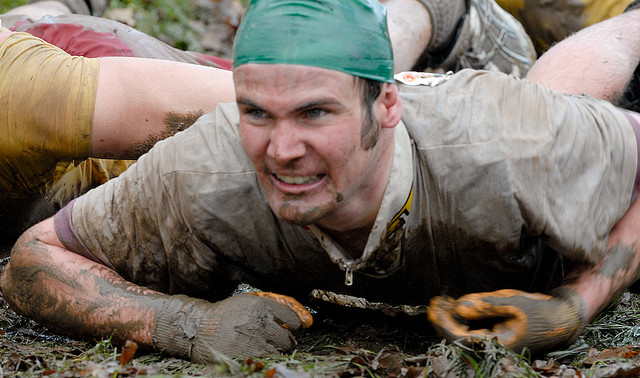 I have never been able to dress for the weather. It’s a constant struggle between dripping with sweat under an extra-large, inappropriately woolly cable-knit jumper, and shivering in a chiffon shirt and soaked-through jacket of the variety that only Primark would have the nerve to call a raincoat. On Sunday the 30th of January, at 3.30am, I was rudely woken by my impetuous phone alarm and it struck me that this was a morning on which dressing for the weather was absolutely crucial. At a DUCK rep meeting some weeks earlier, lulled into that false sense of charitable euphoria such meetings often bring, I volunteered to help at the annual Tough Guy competition.

For those blissfully ignorant readers whose minds have not been soiled by the knowledge of its existence, Tough Guy is cross-country for the clinically insane. The race consists of a 6 mile run followed by an obstacle course that could only have been designed by an insatiable sadist – participants must wade through waist-deep icy water, scramble under barbed wire, climb walls and fences and crawl through pitch black tunnels. I’m making it sound much, much nicer than it was. It was unbelievably brutal. To participate, you must sign a death warrant. The Wikipedia entry for the event indicates risk of “cuts, scrapes, burns, dehydration, hypothermia, acrophobia, claustrophobia, electric shocks, sprains, twists, joint dislocation and broken bones.” The idea of willingly taking part, for most people, is utterly unthinkable. For 53 brave (insane) Durham students, it was soon to become reality. Thank GOD I wasn’t one of them.

Getting out of bed that morning, I am sorry to say, was not something I was altogether happy about. Wrapped up in the selfish stupor of sleeplessness, I grumbled and cursed as I grudgingly dressed myself in (what I considered to be) a ludicrous amount of layers (seven). I even strategically pulled my second pair of tights up to my ribs for extra belly warmth. Surely this would suffice? I certainly felt toasty as I waited for the minibus outside the eerily empty Duke of Wellington. But, after the four hour journey to Wolverhampton, my toes were numb beneath two pairs of tights and two more of socks. My attempts to keep warm had once again been foiled. Bitterness ensued.

When we arrived, it dawned on me that up until that point, I had been incredibly self-absorbed. The revelation came whilst trekking through mud and crowds of people to the campsite where the team of Durham competitors had stayed the night before. Yes. Campsite. In JANUARY. How did I have the cheek to complain about cold toes and waking up early when they had all spent a night in a tent? All I had to do was carry bags and make tea for a few hours, whilst 53 of Durham’s finest lads (and a couple of mental ladettes) were about to embark on what would undoubtedly be the most gruelling and painful experience of their lives. I watched as they pulled on gloves and taped their socks to their lycra leggings and felt an anguishing level of pity and respect for what they were about to endure. No amount of “dressing-for-the-weather” could help them. What’s an extra layer when you’re wallowing in icy ponds?

With my new-found sense of perspective I stopped being grumpy and helped set up camp with the other DUCK volunteers, a team lead by the furiously organised Julie Grey, driven by minibus aficionado Charles Robin and powered by biscuits. Spirits were high as we soaked up the atmosphere of the event, which was very festivalesque – think burger vans, mud, dodgy toilets (worse than Klute, better than Bestival), donkeys (don’t know why but they were nice) and lots of men running round in funny outfits. Whilst the Durham team were rather conservative in their fluorescent yellow t-shirts (one notable exception being a Scooby-Doo outfit) there was a ludicrous amount of men wearing skimpy gimp suits, fishnets, various warrior costumes and even a pharaoh “costume” consisting of not much more than gold body paint and Tutankhamen’s hat. It defied belief. These were men whose penchant for pain would put Dirty Sanchez to shame.

The start of the race was glorious. Do you remember when, in the Lion King, the wildebeest stampeded down the steep gorge, killing Mufasa? It was like that but with scantily clad men, already covered in mud, kicking smoke bombs about and screaming. It was somewhat surreal. The sheer volume of testosterone in the air was overwhelming; the male to female ratio had to be around 9:1. I was utterly in awe of the women who did take part – truly goddesses among women. We joked on the bus home that we’d all be doing it next year, because “if we can do Tough Guy, childbirth will be a cinch!” Someone commented that women have a much higher mental capacity for coping with pain; in which case, the lack of female competitors would seem to indicate that women also have a much higher mental capacity for not doing ridiculously stupid and dangerous things!

After a few hours, having finished the race, the competitors started returning. I was stationed at the minibus, where Julie had organised an efficient recovery system in preparation for them, involving labelling and check-lists and more excitingly, tea and biscuits. I felt very prepared; however, nothing could have prepared me for what was to ensue. I knew they would be cold and exhausted. These boys were full-on hypothermic. Shaking so much they couldn’t speak. Fingers literally not functioning, shins bruised and bleeding “from breaking through the ice”; I was overwhelmed. They needed help taking off their shoes and putting dry socks on. Tough Guy had reduced them to little more than children. The DUCK team had to help them get into warm dry clothes. We felt like WWI nurses tending to wounded soldiers. It was harrowing. My maternal instincts fully kicked in. I was towelling down shivering boys like it was going out of fashion. My selfish unwillingness to wake up early, to be cold, to be muddy, was vanquished; what was left was pure compassion. Volunteering for DUCK, even if not to the extent of running Tough Guy, is always, always an eye-opening experience. It’s worth standing in the cold for. It’s worth waking up early for. And it’s definitely worth pulling your tights up over bellybutton for.