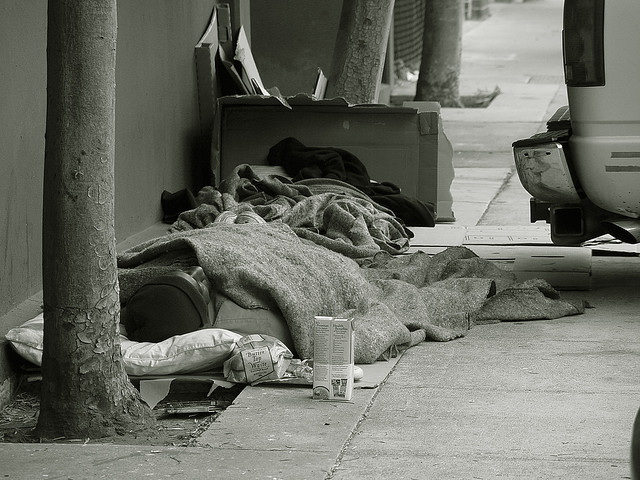 The harsh reality for the homeless.

In David Cameron’s Big Society, homelessness is a one of those concepts that doesn’t sort itself out. It’s not just that homeless charities have also suffered from government cuts (reports have suggested a 25% loss in funding for homeless charities), but as a section of society, homeless people are often the most isolated and looked down upon. The idea of begging, sleeping rough and being outside the norms of society are concepts people find hard to deal with and easier to ignore. How many times have you looked the other way at a Big Issue vendor? Or found yourself suddenly out of change when asked by someone on the street?

I hate to admit it but I know I have. In the hustle and bustle of daily life there just never seems time to stop and buy a Big Issue or spare some change. Then on the rare occasion when time is available, it’s easy to justify keeping your money for yourself; you don’t know how they’re going to spend your money. If they’ve got themselves into a state of homelessness who knows what they’ll do with it (God forbid- they might spend it on cigarettes!) and anyway will it really be enough to make a difference? What will happen tomorrow? Realistically two quid isn’t going to get them off the streets; you carry on walking and those who struggle with homelessness are pushed to the back of your mind for another day.

And so, for those who are homeless, it becomes an entrenched, cyclical problem. Once someone becomes homeless, finding accommodation and getting back into ‘conventional’ society (especially after sleeping rough) is hard. Simply put: no address means no job, no job means no money, and no money means no home – the ladder has been kicked away. The pressing needs of having to find food, somewhere to wash and shelter quickly overcomes any concerns about pride or dignity. The homeless charity DePaul estimates that over 80,000 young people in Britain will experience this type of homelessness each year. On top of this figure there is the growing problem of the ‘hidden homeless’, where people have no permanent accommodation, and so live in hostels or sofa surf. It is now estimated that over 250,000 people under 25 are in this category of ‘hidden homeless’, and with increasing numbers of youth unemployment, it is thought that these numbers will continue to rise.

However, unemployment isn’t the only reason why people end up homeless. Although it is a contributing factor, research into the root causes of homelessness has found family conflict to be the most common cause.1 Identifying and tackling the factors is by no means an easy task, yet recognising and supporting vulnerable people on a case-by-case basis, especially those under 25, can literally make a life changing difference. This term DUCK has teamed up with the local homeless charity Moving On Durham, who aim to break the cycle of youth homelessness in County Durham. Moving On Durham supports people from 16 to 25 years of age, and provides support, life skills, information, advice, counselling, peer education – to name just a few- to help vulnerable people stay off the streets.

So, on Friday 10th February, for the first time in the history of DUCK, the Cathedral will be filled with over 200 sleeping students, all of who will have given up their comfy beds and cosy blankets to spend a night sleeping on a cold, hard Cathedral floor. Experiencing a fraction of the discomfort faced by thousands every night, the funds and awareness raised on the 10th will, we hope, make us all think twice about what being homeless really means. We’re still accepting people for the big Cathedral sleepout- visit http://duck-do.es/ cathedral-sleepout to get involved and sign up! (To find out more about the issues facing homelessness, why not download the DePaul Ihobo app?)