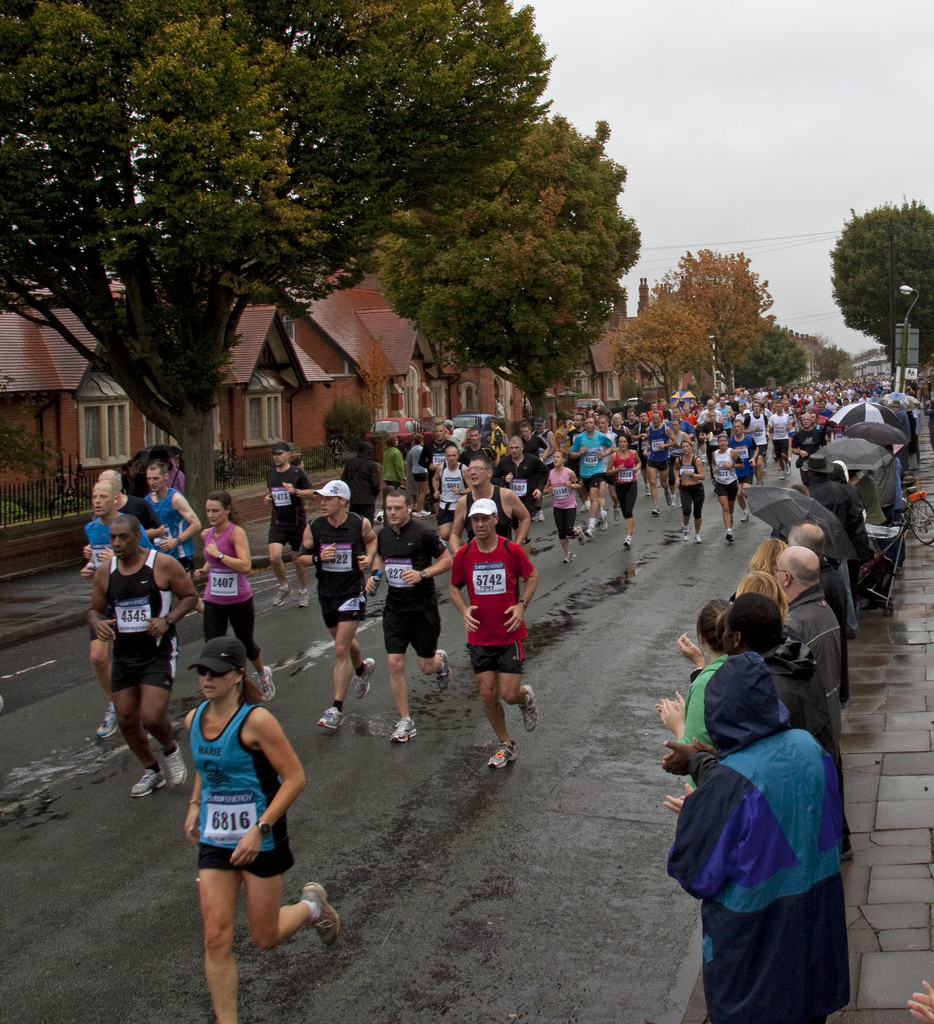 Just out of shot: angry PE teacher shouting at the stragglers

Look back to your childhood and imagine, if you will, being the unfit wheezing child at the back of every cross-country race. The looks of sheer disgust from the PE teachers, the card thrust into your hands confirming that you had indeed come 51st out of 52, and the acceptance that you will always pant your way to the finish line last.

When you first come to Durham, after being told through all your teenage years that you will “shape up just fine”, and you’re still best friends with your inhaler, you wonder if there will ever be any light at the end of the tunnel. So what’s the solution? Start dieting with military-like discipline? Go for a walk every so often? These were just two of the many solutions suggested by my friends. But they just didn’t cut it: Like every Hild-Beder, my evenings were spent starving due to a stupidly early college dinner, and resorting to Pauline’s burger van. (Has anyone ever been able to turn down a Pauline burger?) So dieting was quite obviously out of the question. And walking just didn’t seem extreme enough. How I then thought that the next logical step was to take on the Edinburgh half marathon is unfathomable.

Ok, so I’d signed up. I’ll be honest, that first jog was not pleasant. Think Mark from Peep Show trying to impress Big Suze by going for a run with her. But believe it or not, after a few jogs, it wasn’t so bad. In fact, a part of me was beginning to secretly enjoy it. Goodbye inhaler and hello physical fitness! But sadly it wasn’t to be. While attempting to pretend to be something of a thespian in the fresher’s play I twisted my ankle (God knows how); 6 weeks before I was supposed to go through this pretty much unachievable challenge, I was now forced to walk around with a crutch. Was I going to hobble my way through the course clad in hardcore running gear?!

Although I was told to pull out by countless people, including doctors, I stubbornly (and stupidly) refused to. Was it testosterone? Probably. But at the same time I simply wanted to get through the distance, even if it did mean literally hobbling through it with a crutch and looking like an absolute fool. Throughout the following weeks all I could do was keep my fingers crossed, and realise I had 5 weeks to magically become an athletic runner. Now 4 weeks. Now 3 weeks. 10 days before the big day, and I was given the all clear again! And then the euphoria was swiftly replaced with horror as I looked down at my navel. There’s no way 10 days would remedy this. Goodbye physical fitness, and hello again inhaler. This was very much confirmed when I experienced the familiar old panting after running from Collingwood boathouse to Maiden castle.

The day of the half marathon itself started well enough, with the charity we were running for (Scottish Love in Action) giving us one of the warmest greetings I’ve ever received. But when the actual running started, it started off on a high, in spite of the crowd pointing at me and screaming “FITTIE” as I staggered past drenched in sweat. Eventually it was quite literally a parallel of Run Fatboy Run, although to my disappointment there wasn’t an epic crowd behind me with nothing better to do than follow my every step to the finish. I justified my slow pace by pretending to myself I was doing the “6 Million Dollar Man” run. If you just keep focusing on the finish then it makes the whole ordeal far more bearable.

The best way of taking it on is believing in yourself fully. A lot of people who recently committed themselves to the nauseating Tough Guy challenge said that a good part of your performance depends on your mental determination. Likewise here, as I discovered, if you remain persistent it will pay off. In fact it’s surprising how quickly the time genuinely passes when you undertake this sort of a challenge. When you finish (yes, I did finish eventually), you look back and wonder if you actually did run those 13 miles. Cheesy as it sounds, it truly was rewarding to have accomplished a challenge that was previously thought to be unachievable. Yes, my legs were so exhausted I was reduced to waddling penguin-style for the next few days, but as a fellow DUCK runner once said “Pain is temporary, pride is eternal” (Also borderline cheesy, but completely true).