DUCK: A Hitchiker’s Guide to the UK 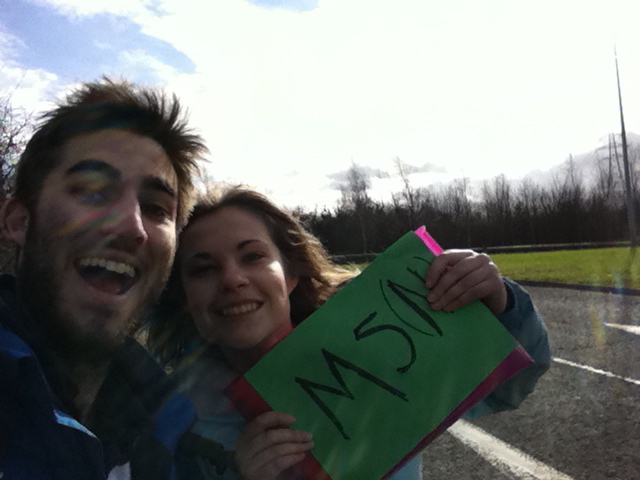 Could you hitch-hike nearly 300 miles home?

There are some things I never thought I would do at university and some things I thought I would just never enjoy. Being blind-folded and thrown into the back of a minibus at 5.30 in the morning was one of them. Being driven in that state for 5 hours was another. Although the prospect of getting totally and utterly lost is not for everyone, it seems it was rather an exciting notion for small collective of Durham students a few Saturdays ago.

Getting Lost was no exception to the new creative breed of charity fund raising that has hit campuses all over the UK. Having spent the past few weeks harassing our friends and family through the “Just-Giving” website, we prepared to hit the road armed with little more than an umbrella, a map and a pack of chocolate biscuits. The idea is simple. You are blind-folded and driven for 5 hours in any direction to be released in an unknown location from where you begin the exciting race back home. With no money to spend and no previous experience of hitch-hiking, we found ourselves in the middle of the Forest of Dean, Gloucestershire (and I do emphasize the middle), where making it back to Durham in a week, let alone a day, seemed a rather monumental challenge. Still, having promised to be back in time for a friend’s birthday that evening we headed off through the forest in search of our first lift home.

It all began with a lovely mother-daughter combo on their way to buy a new fridge. With our thumbs readily pointed upwards and a sign simply reading “charity”, we were able to get a lift to the local village, Cinderford. From there we found a lift with another man, who we strongly agreed either needed a larger car or to lose some weight. I then found myself in the back of a rather more spacious car, learning the alphabet and the anatomy of a lady-bug, with the aide of my 6-year-old teacher and several food-splattered picture-books. After the following journey with an army helicopter pilot, we found ourselves at Gloucester airport, trying our thumbs out at some rather faster means of travel. Once realizing “Mr. Simon” had left ten minutes before we had arrived (Mr. Simon being the only pilot flying North today), we directed our attention groundwards and towards the network of motorways ahead of us.

Three journeys later, an hour in the rain, and a few more miles North, we found ourselves on the M1 with a self-proclaimed “horse whisperer”. Whilst initially thankful to be out of the rain, our optimism rapidly faded as we got chatting. This lovely individual – and anyone who takes time to pick up hitch-hikers will forever in my eyes be deemed lovely – had a few points which raised some very worrying questions. The first was why he had a tray of medicine loose on the front seat. The second was why he had only three teeth and no right arm. The third was why there happened to be tray of rare bird eggs, a map and pair of binoculars on the back seat; and fourthly, why he decided to tell us that he hoped the car would last the journey, given he had crashed not an hour beforehand. With those questions forever left unanswered and a leaving remark that he had also won the Grand National a few tens of years ago, we took to the last leg of our journey. Three hitch-hikes later and we found ourselves on a Durham City Coach, amongst a coach-load of extremely inquisitive school kids, racing towards the DSU. With a third-place win, twelve hitch-hikes and 291.6 miles covered, we thought we’d leave you with a few pearls of wisdom.

Team Name: Excuse me sir, I seem to be slightly lost.