Harriet Mallinson in Columns on 14 November, 2012. 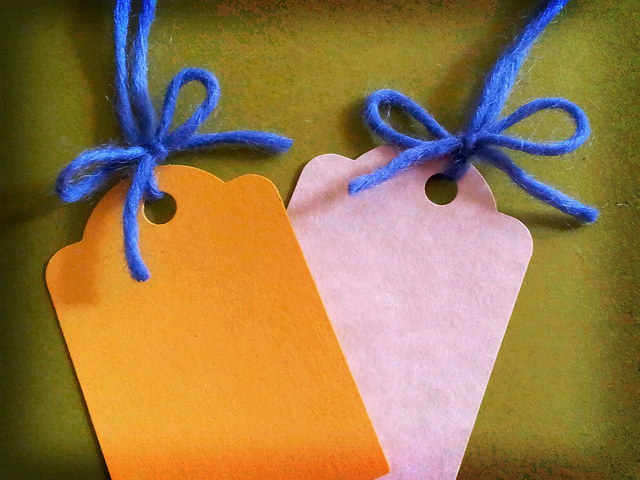 Wouldn’t life be so much easier if everything was clearly labelled?

Last night I found myself talking to a tall, handsome stranger in a bar. ‘This is going fantastically,’ I said excitedly to myself, ‘you could cut the sexual tension with a knife and I swear he just brushed my leg.’ After an hour of conversation and some serious flirting on my part, we go our separate ways. ‘I’ll be sure to seek him out later in the evening,’ my inner self announced. Only what is it I discover later? That he has a girlfriend. Bloody fantastic – I just wasted an hour of my precious night for nothing.

Unsurprisingly, this got me thinking: wouldn’t it be great if everyone walked around with some sort of dating site blurb attached to them? For instance, “23 year old bachelor looking for girlfriend; enjoys tennis, macaroni cheese and watching the Discovery Channel.” Anything, just anything to let us know what they’re about before we bother talking to them! Like those awkward occasions when you strike up a conversation with someone only to realised two minutes later that they’re a total nutcase and their sole hobby is playing with lego and you have to fake a phone call and make a mad dash for the exit.

Two hundred years ago relationships/sexuality was a lot clearer cut it seems to me. You were either married or single, homosexual or heterosexual. Nowadays the list of possibilities is endless: ‘taking a break’, ‘friends with benefits’, ‘in an open relationship’ and don’t get me started on the confusing nature of bisexualism. Although one thing is clear in this country, if you have a boyfriend/girlfriend (of the official label variety), you remain monogamous. That being said, not everything is always this defined here. One of my friends has been with his girlfriend for the past two years yet they both merrily get with other people. One can only presume they have spent far too long in Europe.

In France, where I spent the entire of last year, boyfriends became as irrelevant as a Christmas tree at a harvest festival. If you have read any of my previous Year Abroad articles, you will see that this is not the first time I have raised this point. It would seem that the French do not go in for definitive labels. They are a pan-amorous nation by all appearances. Sure they have a girlfriend… but that certainly won’t stop them hitting on you guns-blazing. In some ways it could be argued that this is perhaps a less complicated approach to us Anglo-Saxons. They have no boundaries, so they have no metaphorical barriers to break or crash into. Everything is a possibility. Indeed my year abroad motto was il faut profiter which essentially is the French version of YOLO: one must make the most of everything.

However, call me horribly British but I would never truly be able to accept this open relationship style of shenanigans and I certainly came a cropper in Paris when sticking rigidly to my beliefs in monogamy only to be confronted by a certain Frenchman’s total lack of such principles… In short, returning to Durham is proving fairly refreshing. At least here you know where you are with singletons/couples… unless they fail to reveal their other half until three hours into the evening…

One thing is for sure, I miss my il faut profiter way of life. No matter how many times I drunkenly yell YOLO in Pizza King after a night out, my care-free, exam-free lifestyle is now definitely behind me. Whilst in France, when debating whether to do something or not, someone would quote il faut profiter, we’d give each other a knowing wink, grab our bags and go. Think “Why Not” by Hilary Duff… (Bad music taste, me? Never). You could flirt outrageously with someone (and perhaps more…) and think nothing of it. Clearly, the Durham scene is not the same; it’s not called the bubble for nothing. Truth be told, the pause button was pressed over a year ago and now it’s very much back on play. Although ironically, play is exactly what I’m not doing right now… I’ve yet to go to Studio but have attended every single lecture and even begun some secondary reading. How the 19 year old fresher me would be horrified. Pre-year abroad the languages department warned us of the culture shock we would inevitably encounter once we moved abroad. I never encountered it…until now, back in Durham. Suddenly everyone is infinitely younger than me, bars and cupcake shops have sprung up where dusty abandoned buildings lay before, and friendships that were as sturdy as the Pyramids have been torn apart and replaced with new ones. Apparently I was horrendously naïve think we would simply slot right back into the old way of life.

Two weeks ago found me excitedly anticipating Hild Bede Old Boys weekend. They’re a funny old thing aren’t they these Old Boy affairs? For starters the name itself implies a load of doddering octogenarian males. Optimistically, such an event could be viewed as a type of gold-rush occasion – the perfect chance to get with that elusive person whom you never quite conquered whilst they were still at uni (someone certainly tried and failed using that line with me a few weeks ago during Grey College Old Boys…). Pessimistically one could say that it is the prime opportunity for utter embarrassment – for all those awkward/humiliating memories to come flooding back as the old, familiar faces appear. Those memories of first year when walking into the college canteen was a chance to have awkward eye contact with an old flame…could potentially be re-enacted…

Thankfully the weekend panned out on the optimistic side of things despite the bit of awkward eye contact. I still didn’t spy any labels stating relationship status though, perhaps next time? Food for thought.