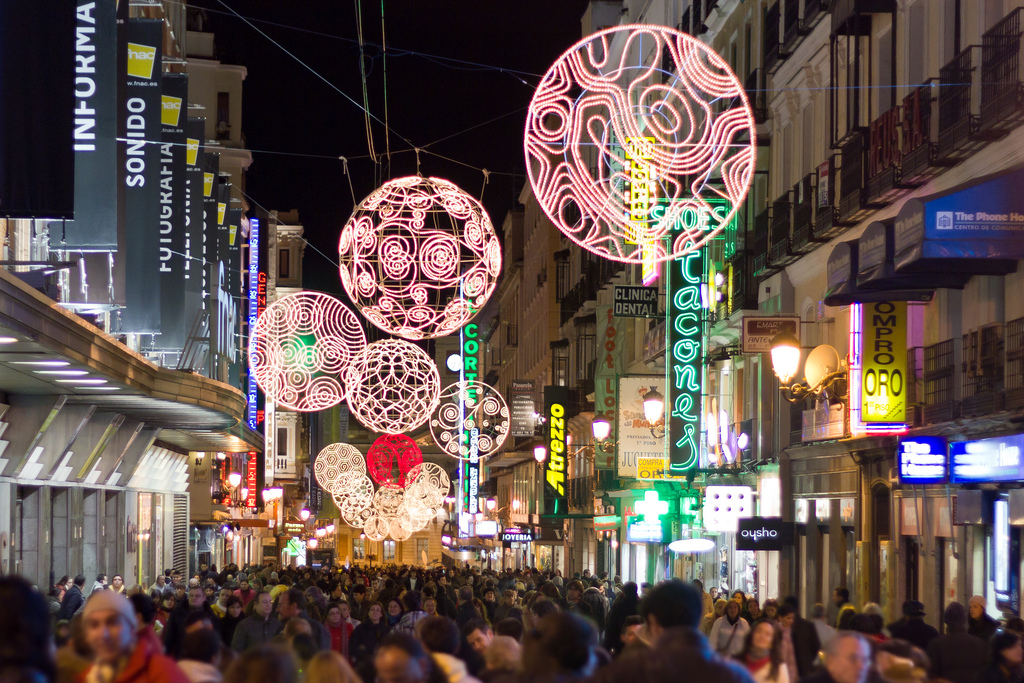 Christmas loses its appeal as you get older. I think we can all agree on that sad, universal truth. But having never experienced Christmas in a capital city, and keen to see things done the Spanish way, last week I looked to roll back the years, peel back the layers of cynicism and rediscover some of that childhood innocence. I headed out to the centre of Madrid to soak up the festivities.

Now I’d love to tell you that the festive flame was reignited within me, that I ice skated to my hearts content, and that I ate a dodgy Bratwurst. Sadly, I did none of the above, and left feeling pretty grumpy as a result.

We got out of the metro station and were greeted by the lights on Madrid’s main street. As you’d expect, they were pretty spectacular and made the city look stunning. They were even starting to make me feel all warm and fuzzy and Christmassy inside. But, soon after, reality came crashing down. Eagerly making our way over to the ice rink, we got there only to find that it was for under 12´s only. Any innocence and optimism I had was crushed then and there. That one little sign was a taunting reminder of my old age, a glimpse of the naïve excitement of Christmas… with the door slammed firmly in my face.

So we set off, deflated, to the Christmas market in the stunning Plaza Mayor. I looked up to see every street rammed with people, packed into the city centre like sardines. I like the atmosphere of large crowds, but this was something else. The 700 metre journey took us half an hour and I spent most of it squashed up against the back of a sweaty Argentinean. With every barge to the shoulder I became grumpier, calling into question the self-important sense of priority that pram pushers seem to hold over the rest of us. We can appreciate you have a young child with you but that’s not excuse to use him as a battering ram!

And so I arrived at the Christmas market in need of a stiff drink. Needless to say, there was nothing on offer. Apparently, in Spain, refreshment and food stalls have no place at a Christmas market. In fact there are only three stalls; one with nativity scenes, one selling mistletoe and the other offering stockings and other such tat. These repeated themselves around Spain’s main square ad nauseam.

By the time I’d got out of there, I was hungry, thirsty and grumpy. The festive feeling and Spanish atmosphere that I’d been looking for were lost among the crowds. So far Madrid has failed royally in getting me in the mood for the festive season. Let’s hope something can provide that Christmas spark soon; I don’t want to turn into a Spanish Scrooge. There are enough of them already.