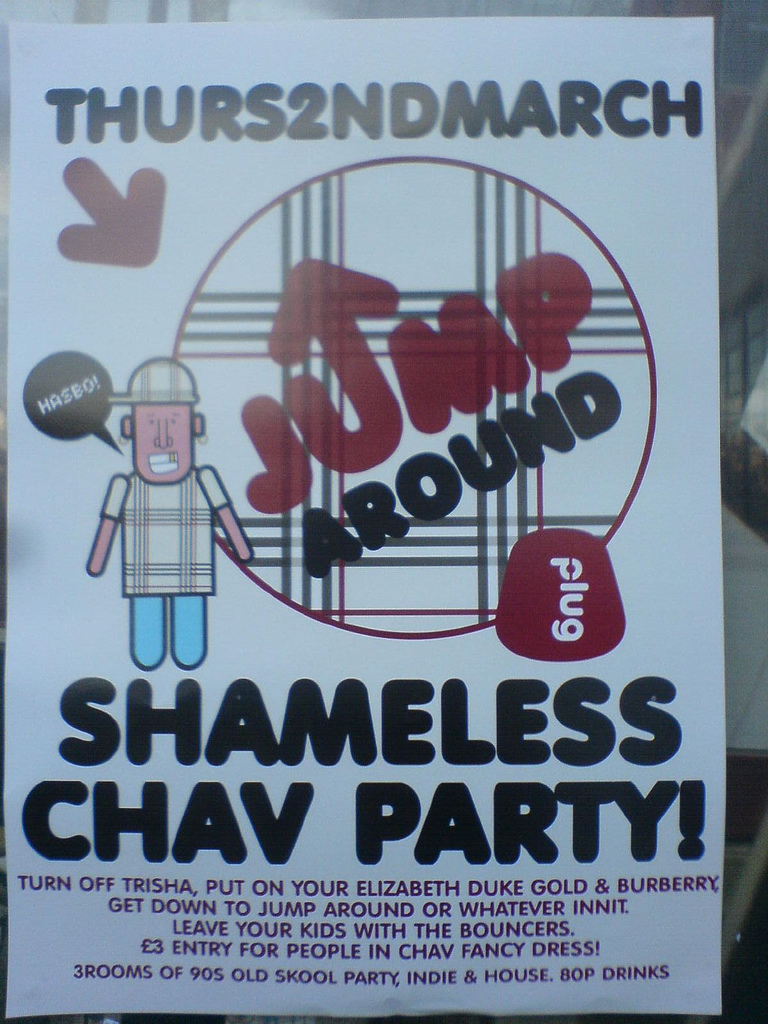 SHOULD we be ashamed?

When in my first year I was invited to a ‘Chavs vs. Rahs’ party, I saw it as an opportunity to discover whether I was improved by a shedload of makeup (without feeling like a prostitute) and to have a comfy and un-body-conscious night out in trackies and trainers. In the end, I was one of only two people I knew who didn’t go. While my decision was made for me by an essay deadline that appeared out of nowhere (or out of my diary, where it had been conscientiously ignored) my comrade had chosen to miss out, opting to stay in rather than attend an event whose theme he despised as simply an excuse for posh, privileged students to mock those they see as their social inferiors.

Initially thinking this a pretty intense reaction to a harmless fancy dress theme, after more thought I was embarrassed to have ever considered going and to have had such a moral blind spot.

Dressing up as a rah isn’t too bad as long as you’re able to laugh at the fact that it’s only a slightly exaggerated version of you – as most of us in Durham are somewhere on the rah spectrum anyway, backcombing hair, wearing even sloanier clothes and putting on a particularly affected voice would just be making fun of ourselves. But dressing as a chav is another matter, and the fact that Prince William has done it (he once went to a chav-themed fancy dress party at Sandhurst) doesn’t make it acceptable or any less condescending and arrogant.

To call someone a chav is not equivalent to calling them a goth, an emo or an indie kid as, unlike these labels, ‘chav’ insults more than just dress sense or music taste. It’s even more insulting than being called a rah, because although this term does imply a certain class, background and attitude, it is generally accepted that the rah is not necessarily a bad person, just an oblivious (and/or obnoxious), lucky, rich one. In short, just a bit of an idiot, like JP in Fresh Meat. To be branded a chav, however, is to be associated with not only ‘bad’ dress sense, heavy makeup, poverty and/or vulgar tastes, but also laziness, theft, violence and extreme scabbing off the system (shown by the assumptions of the posh girls in the BBC’s Geordie Finishing School for Girls).

What Lynsey Hanley in The Guardian terms ‘the middle-class contempt for working-class people’ has been the subject of recent debate after the publication of Owen Jones’ book , which opens with the casual use of the term in a middle-class dinner party of educated, liberal-minded professionals. As Jones notes, had the word been ‘Paki’, the guests would all have been appalled.

The Telegraph’s Simon Heffer made a reference in 2007 to the ‘depravity’ of ‘our feral underclass’, a phrase that seems to encapsulate the modern opinion of chavs. Heffer’s comments were specifically regarding drug-dealing, dangerous dog-owning criminals and he does not actually use the word ‘chav’, but his ‘feral underclass’ phrase is not limited or qualified and seems to apply very broadly to the lower classes. The disgust implicit in it smacks of the extreme discrimination encouraged by the ancient (but still present) Indian caste system and its shunning of the ‘untouchables’, and the disturbing suggestion of inhumanity inherent in ‘feral’ correlates with the recent caste discrimination tribunal in Britain, where an Indian couple claimed to have been forced from their jobs after their marriage, being told that they were ‘different creatures’ as the woman was of a higher caste. This implication that the ‘inferior’ person or group deserves different treatment because they are in some way less human than their superiors, and are nearer to an animal level in terms of civility and intelligence, has been the age-old justification for discrimination against other humans.

Middle and upper class people only enjoy climbing a few rungs down the social ladder to dress up (or down) as chavs because they are secure in the knowledge that they could never actually be mistaken for a real one. The young, cool and middle-class have adopted some chavvy language (standard, innit, safe, blud, bruv…) and clothing (bright, cheap-looking tracksuit tops, excessively blingy/tacky jewellery) in the noble spirit of ‘post-modern irony’. They employ the language or items effectively to emphasise their unchavviness, and as a symbol of their superiority, in shaping the hallmarks of an inferior culture to fit their own – although the chavs did this themselves on a huge scale by making the distinctive tartan of luxury brand Burberry their hallmark, to the extent that in 2004 pubs and clubs across the country began to ban anyone dressed in the label from their premises.

It seems likely that in future years, along with being despised for our inaction regarding global warming, the unashamedly classist attitudes of our generation will astound our descendants. As we cringe at our grandparents’ racism or homophobia, so normal in their youth, perhaps our grandchildren will be appalled by our shocking intolerance towards the “lower classes”.