Come Live With Me And Be My Love 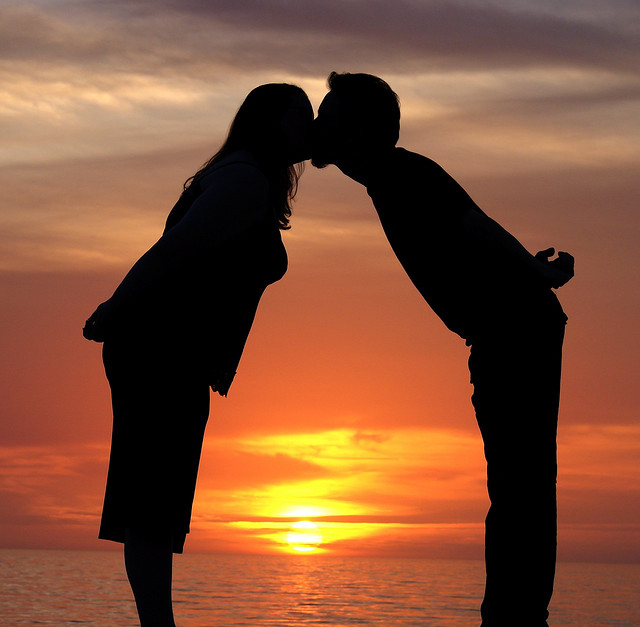 A romantic moment: far beyond the scope of young men in France

Love at first sight… something that I long to be proven possible but that I am sadly certain remains, for the most of us, in fairytales.

However, judging from the interaction I’ve had with French men so far on my Year Abroad, “love” here is as common as my bi-weekly trip to Intermarché, the local supermarket. ‘Anywhere, anytime’ appears to be the Frenchman’s motto when it comes to approaching a girl. Even looks seem to be of no consequence – it has two legs and is female, and that seems to be all that matters.

A couple of days ago my friend Ivy encountered a man whilst walking down the street. All she did was absent mindedly catch his eye… and he pounced. A very brief “hello” culminating in, “Can I have your number? I mean, really, what did he think was going to come of that? I once heard that the French believe that English girls are far more promiscuous than their French counterparts, so is that why they think they can simply smile and we’ll just hop into bed with them? The moment a man here detects the trace of an English accent, nothing can stop him. One even grabbed the hood of my friend’s coat in the street the other day in an attempt to get her to talk to him. No Sir, near-strangling a girl is not an aphrodisiac.

The strangest thing to me is that once such men are out of the humdrum routines of their lives and placed in a nightclub, their seduction attempts come to a sudden halt. In England, it is in the clubs that the men come alive. The bar is an excuse to be pressed up against a girl, perhaps slipping in a cheeky grope – and don’t get me started on grinding… But here, there is none of that. The normally proactive-in-the-street types simply stand and stare. A French friend of mine has alerted me to the fact that our local club is a classy place rendering the men more ‘respectful’ towards women. I was somewhat puzzled therefore when I later observed a sign outside advertising “Glam and Strip”…

And what about the women’s attitude? Yes, they too differ from the average female Brit. When we arrived in this club during our first week, we were dancing the minute we sashayed into the room, completely in a world of our own. I was later informed by my friend Arnaud that it was this that alerted the rest of the clientele to our English-ness. French women would rarely do this, and we certainly noticed their judging looks at they stood at the sidelines, no doubt condemning our brash behaviour. On reflection it is probably this difference in conduct that renders us ‘easy’ in the eyes of the French. Nevertheless, one thing for certain is that “playing hard to get” just isn’t in the Frenchman’s terminology. The “Treat ‘em mean, keep ‘em keen” mentality of the majority of Englishmen has always infuriated me, I must admit. I am a firm believer that beating around the bush is a futile activity… something the French seem to agree on. Never have I seen men move so fast as I have during my sojourn in France; nothing is an obstacle to them, not even a boyfriend. One man has been known to say after being rebuffed by a girl with the excuse of having a boyfriend back home, “Yes, but he is your English boyfriend, I can be your French boyfriend”. What’s more, it turns out he himself has his own girlfriend in the north of France. Nothing like keeping your options open, hey? However, I cannot deny I find this forwardness somewhat refreshing. Finally, a man who knows what he wants.

The biggest bombshell of all, Ladies and Gentlemen, was when my next door neighbour (when questioned about women and the big “L” word) announced that France quite simply is not the Land of Love. Frenchmen are not romantic and all they want is sex. End of. My lifelong romantic dreams and designs on the French nation wobbled precariously before my eyes. So I wasn’t going to be wooed with champagne and chocolates and have undying love declared to me at the foot of the Eiffel Tower? Sacré bloody bleu. Said neighbour continued on to inform us that the romance we have so endlessly clichéd is “amour ancien”, and thus is a thing of the past, consequently confirming my belief that wouldn’t life just be lot nicer if we lived two hundred years ago? Tragically it seems that the French women’s approach too is morphing into this blasé attitude to sex, with ‘friends with benefits’, or sexe entre amis as the French say, frequently becoming the sought-after option by many young people today.

Thankfully the men I have spoken to have further informed me of the fact that this mentality belongs, for the most part, to those under 26. Those over this age are more likely to be interested in something serious. Thank the Lord, there is light at the end of the tunnel, and either way an older man in always preferable, n’est-ce pas? Whatever their flaws, these froggy folk have their moments. And yes they move at the speed of light in their seduction methods, but then again who wants to wait for three weeks to get to second base? So I guess it’s au revoir to Tom, Dick and Harry, and bonjour to Pierre, François and Jean…