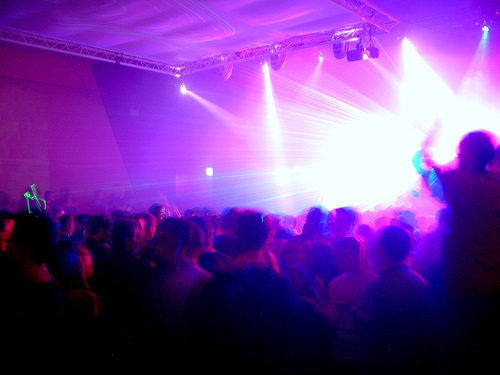 Are the queues and cost really worth it?

I wrote in an earlier article that tea is overrated, hot, bitter leaves in water; and this article is on a similar controversial vein. Clubbing is rubbish. Everybody above the age of 12 (and arguably even 12 year olds) knows that discos are super lame, yet clubbing is essentially the same thing – except with drinking. Drinking only improves this experience because you basically get so intoxicated that you forget you are white and middle class, and therefore obviously can’t dance. Personally, I look a bit like Forrest Gump dancing whilst still in a leg brace, on ice, high on meth. So today I am going to dispel the myth that clubbing is enjoyable.

Before nightclubs, there were discos. Everyone went to discos when they were younger, and hated it. Discos feature young children being forced to partake in this almost torturous affair, attempting to move to undanceable music, with divide between the sexes more obvious than that between the Palestinians and Israelis. I recently revisited this terror whilst teaching nine year-old students in Austria, but before you make a Josef Fritzl joke, rest assured that I did not molest them after locking them in a basement. Although having said that, the disco was in the basement of the school… All I can say is that when you see hoards of nine year-olds leaving a disco because it is so bad, it must be beyond the realms of bad. As adults we hate being forced to do anything, so it is surprising that we force children to partake in something they clearly despise. Furthermore, from my observations, the kids didn’t so much dance as sprint around the room, crashing into each other like they were playing human bumper cars. I can now at least see how mosh-pits developed, and I wouldn’t be surprised to see any of these kids become anarchists and throw fire extinguishers off roofs during student protests.

Whilst I think that most people agree that discos are barbaric and inhumane to the participants, my views on clubbing are likely to be more controversial. Clubbing is clearly popular as pretty much every teenager does it, and also worryingly people who are desperately trying to hold on to the vestiges of youth (locals night in Durham anyone?) – so why do I attach so much hate to it?

Being the most impatient man on this earth, queuing outside nightclubs is bordering on unbearable for me. My first experience of clubbing was in Spain, where we could skip the queue because we were English, and therefore would spend ridiculous amounts of money in order to get plastered.

This doesn’t happen in England, however, unless you are bordering on 18 years old, female, and dressed like a slag. When you have waited long enough outside to consider bringing a camping chair to sit on, you enter the club. God forbid you go clubbing on the weekend, as you can then kiss goodbye to your week’s wages/student loan on the entry fee alone. Other times it is modest, but then you realise that this is because you end up spending the rest of your life savings on the alcohol inside. However, you endure the pain and pay for the drinks because you need to get plastered in order to pretend that you’re enjoying yourself and dance like an epileptic during a lightning storm.

I have never been in a sauna, and the reason for that is that I don’t find being hot and uncomfortable relaxing. This is a nasty side-effect of clubbing however, and there has been many a time when I have actually been drenched in my own sweat, which the ladies obviously love… sometimes. On the other hand it is undeniable to say that going clubbing is a good way to hook up with someone, if for no other reason than they are plastered and therefore have extremely poor judgement. At least, I hope this is the reason for some of the liaisons I have witnessed.

My final quarrel with clubbing is that usually the music is awful. I hate dubstep with every fibre of my being, and it appears that this is the fashionable genre of noise in “cool” nightclubs. It’s repetitive, dull and even more undanceable than the stuff you listened to at discos. Admittedly there are some clubs, such as Klute, which do play music from the gods. If nothing else, you think it is the greatest sound in the world when you’re wasted. Furthermore, I know I sound like an old man, but the music is too loud; I don’t particularly enjoy having my ears ringing for 24 hours after hearing the same crap bassline for four hours. It also means you can’t talk to anyone, or “chat them up”, and so for me at least, I have to just dance or “grind” awkwardly with my sweaty body against theirs for as long as I can. They love it.

In summary then: you wait for ages, pay too much money for entry and drinks, get your body abused by both loud and crap noise, and get drenched in sweat whilst dancing like a nut-case on meth. But on the other hand everyone else seems to enjoy it, and you can get laid easier. Balances out then, I guess…