Christmas in the Durham Bauble 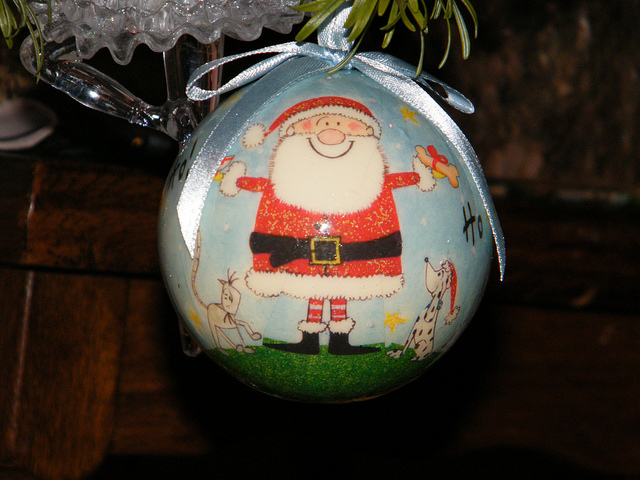 A lovely addition to any tree, a rather cheeky Santa

Christmas is the time of year which Durham fits into best. The cathedral bells ring out over what becomes almost a fairy-tale town in the frozen grip of a white Christmas. The markets encased within Palace Green’s historic square buzz with festive activity, students hurl themselves down Aidan’s hill on sledges and dinner trays, rower’s oars crunch through the frozen Wear as the term draws to a close. Just as the Lumière artists transformed the statue of Lord Londonderry into a giant snow-globe, so the city itself is transformed as snow falls upon the brass bands and choirs lining the streets of the Durham Bubble. Standing at the station and looking out over the city, an outsider might not recognise much difference between today’s Durham and that of a hundred years ago, as time-honoured traditions are upheld.

And what could be more traditional than a trip to Christmas Klute! After all, nothing rounds off a carol service better than being greeted by a bouncer reluctantly wearing a Santa hat in Klute. Christmas Klute is an essential of the Durham festive season, a chance to unwind to the sounds of Mariah Carey’s ‘All I want for Christmas is You’ on repeat. Possibly owing to the highly romanticized setting (a single strand of mistletoe hangs over the dance floor), or the relentless over-viewing of Love Actually in December, the entire student body is driven into a seasonal sexual frenzy. ‘If you can’t pull in Klute at Christmas, you never will’ is a phrase often used, normally met with solemn nods of approval by those nearest. When the night is through, the Christmas lights of market square and the white reindeer lights of the viaduct provide a pleasant stagger home, where you can cheerfully eat the next five days of your advent calendar and pass out under the Christmas tree.

Unfortunately, the uni departments are ignorant to our need for sleep and have not quite been convinced yet into subscribing to the old school tradition of only playing games on the last day of term. The final days of December in Durham always end up fraught with deadlines, and for every ‘Merry Christmas’ you hear, there’s a student rushing past with fear in his/her eyes as s/he manically tries to submit essays and still make it to the next party.

And no-one lets the period go by without parties. Never had I seen so many glittery and sequinned outfits jumping out of the closets, or (slightly more conspicuous) so many shepherds, angels and people-sized presents walking past, before I came to Durham. After all, in the eyes of a social sec., what’s Christmas if not an excuse for a Nativity social and a three-course traditional Christmas dinner? Followed by Studio, of course. And with a bizarre mix of Christmas cracker crowns and Poundland cowboy hats, if last year was anything to go by. I think this may be why the word ‘students’ is now so often said by adults with that half-exasperated sigh. Let’s face it: we don’t always exactly stick to the conventional. I don’t think I’ll ever forget the look our pillow-pregnant Virgin Mary got when some locals passed her outside Jimmy’s with a drink in one hand and a cigarette in the other. Not exactly the traditional religious depiction as far as I can tell.

Yet, despite remaining adamant that Christmas should be mixed with nights out, we also crave the traditional, family-friendly version of the holiday season. Baubles, tinsel and all sorts of decorations appear from wherever they have been hiding (unless you live in my house, where the Christmas tree was deemed too pretty to take down and has thus now been standing for five years). People flock to the market for unique crafts, toy Santas and tasty home-made jam or just simply to soak up the atmosphere. Every other person is suddenly drinking mulled wine (which for some reason, like roasted chestnuts, ceases to exist for the other 11 months a year) or asking for cinnamon in their coffee. Likewise, the bakeries run out of their gingerbread men and their sandwiches filled with cranberry sauce and stuffing.

No matter the stress of trying to find the perfect present and sorting everything before we rush off home, it seems we simply can’t get enough of Christmas Durham. Now, if only I could find a Christmas card to capture it all…