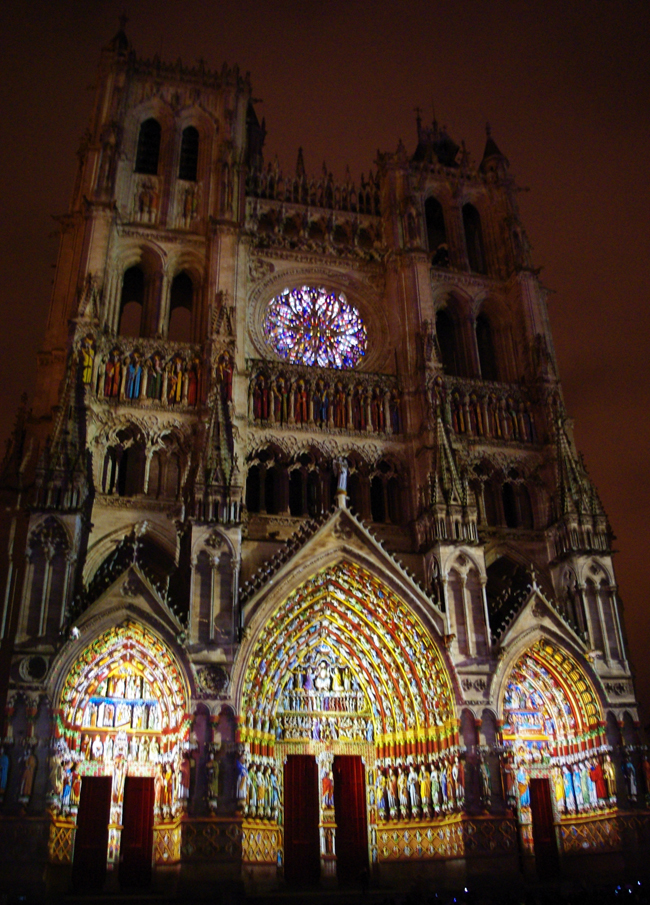 “Parfums d’hiver” is the name that Amiens gives to the Christmas period, quite literally translated as the “scent of winter”, a rather beautiful name for this special time of year, I think. Indeed, you cannot help but be captivated by the overwhelming smell of crèpes, roasted chestnuts and mulled wine as you wander the streets of Amiens. I have definitely indulged in 17 too many crèpes as I’ve attempted my Christmas shopping, the smell being far too enticing for me to resist – it would almost be rude not to partake. The Christmas markets are completely adorable, embracing the theme of “Around the world in 80 days, the Mongolian Yurt”. I failed to previously mention that Jules Verne, the pioneer of the science fiction genre in literature, lived in Amiens between 1882 and 1900, so what other theme could have been more fitting? Hence a pocket of Mongolia has been brought to Amiens and the city centre has been adorned with hot air balloons, a ski slope and a rather huge slide for sledging! Now unfortunately these last two attractions are a little on the ageist side, as you can only be up to 12 years old to enjoy their delights. Hmpf. I deem this to be rather unfair, as I can’t think of anything more exciting that a little bounce down a slide in the centre of the town. Unfortunately health and safety think otherwise so it looks like I will just have to observe this genius.

Furthermore there are 125 chalets taking the shape of the actual Christmas markets and although there is some of the usual tat you find in markets, there are actually some rather lovely finds. Although the crepe stalls will forever take the number one spot in my heart, there are plenty other wonderful stands, none more so than the ones filled with trinkets such as tiny sequined boxes that look pretty but serve a fairly useless purpose on your shelves. Yes, I’m a sucker for those. I’m also the world’s hugest sucker for fairy lights; I may be twenty years old but oh good lord, turn on some of those little sparklers and I practically light up! And Amiens has not let me down on this front. We have flashing trees, twinkling stars wherever you look and of course the illuminated face of Jules Verne popping up here and there. We’ve almost reached Blackpool Illuminations status and that makes me one very happy girl indeed.

In fact I think the people of Amiens may have a slight obsession with Verne, as his featuring in the magic of Christmas doesn’t stop at his face in the lights. Oh no; on entering the centre of town, you pass under a giant arch formed by a hot air balloon modelled on the Montgolfiers of the author’s day; and the Jules Verne fun continues with a flight simulator taking you off on a journey through his life. I shall definitely be leaving Amiens a complete expert on the man.

During the Christmas evenings at nightfall, Amiens Cathedral becomes an immensely beautiful sight in glorious colour. The portals of the cathedral are drenched in a spectrum of light, breathing life back into the apostles, saints and other statues that are sculpted into its façade. It is without question an absolutely breathtaking light show, hoping to evoke a vivid idea of what the cathedral would have looked like to mediaeval visitors, for whom the statues were their only way of “reading the Bible”. The saints in all their regalia are revealed, with the magical essence of the colour bestowing the spectator with a sense of mediaeval architecture as the polychrome would have been at this time apparent. This masterpiece of Gothic architecture touches the heart of Picardy with a magical quality – the light show is truly spectacular and an unmissable tourist attraction.

Just to keep you updated on the (un)romantic French male population, this week one particularly delightful student told me during our class that I have “a fat ass.” Those were his exact words, I kid you not. So the French charm still isn’t quite shining through, yet I live in hope. I also discovered this week that a group of third year boys have written a song about me, entitled “Tonight Amy”, with, I quote, “vulgar lyrics”. Hmm. Once again I am not entirely sure whether to be flattered or immensely creeped out. So yes, as you can see, I am still waiting for those beautiful, romantic, heaven-sent French gods to appear but with only eight weeks to go, I sense my hopes are dwindling. French men, what has happened to that renowned Gallic charm?

Alors, Amiens has not failed to get me into the Christmas spirit; quite the reverse, with its glittering lights, divine Christmas treats and pretty little markets. However, as always, the thought of Christmas shopping is daunting; one, as it definitely has not commenced yet, and two, because on discovery this morning I appear to have an epic 69 euros left in my bank account. How this travesty has occurred I’ll never know, but it could potentially make buying the entirety of my presents plus my mum’s birthday present (having a birthday on 23rd December is just uncalled for, mother) a little difficult. So it looks like those tiny, little, pointless, sequined boxes will be coming on the flight home with me then… bisous.