A bloodhound might not be as fast as a supersonic car, but it’s much faster than an electric car queuing up to recharge

Twenty years and about six weeks ago, the current world speed record on land was set by a British jet-propelled car, the Thrust SSC. Its record of 763mph, established in the desert of northern Nevada, has never successfully been challenged – until now, that is, because another British team is soon to challenge the Thrust for its crown in a jet-propelled car of its own. This young pretender had its first public run a little over a month ago at Newquay Airport in Cornwall, and has – somewhat bizarrely – been given the name of Bloodhound.

This strikes me as a rather incongruous name to give to a vehicle being used to try for the world land speed record, because bloodhounds are very far from being tireless balls of energy. Greyhounds they are not; in stark contrast to their lean cousins with a long history of racing, bloodhounds are much better known for their couch-potato levels of laziness and mild, gentle temperament. If the Bloodhound jet-car turns out to be anything like its canine namesake, it is much more likely to let out a gentle sigh and mechanically go to sleep when the lights go out, rather than go charging off like the clappers for the finish line. One might as well call it the “tortoise”, and I do wonder why the engineers chose not to name their creation after an animal better known for its rapidity of acceleration and general speed capabilities; surely something along the lines of “cheetah”, “jaguar” or even “greyhound” would have been more appropriate for a machine whose creators intend it to become the fastest thing in the world.

None of this, by the way, is in any way intended to denigrate the achievements of the engineering team behind the Bloodhound. There is something rather satisfying in the fact that they have managed to nail its estimated top speed down to the nice round figure of 1000mph, and let us not forget that, if it is successful, the Bloodhound will become the world’s first supersonic car; a quick Google search tells me that the speed of sound at ground level is around 767mph, so the Thrust of two decades ago missed out on claiming that particular “first” by a mere 5mph, which must have been more than a little frustrating for the designers of the Thrust. And who wouldn’t find it pretty cool to be able to zip along at those kind of speeds? It certainly cannot be denied that journey times would be well and truly cut to shreds if the technology behind the Bloodhound came anywhere close to becoming mainstream. To use a fairly rough example, the distance between Durham and London is approximately 276 miles; you don’t need to be a final-year maths student to be able to work out that at 1000mph, you would be able to get from one to the other in 0.276 hours, or 16-and-a-half-minutes. That would be quite an improvement on the torturously long travel times currently faced by the large proportion of Durham students who hail from the south of England! 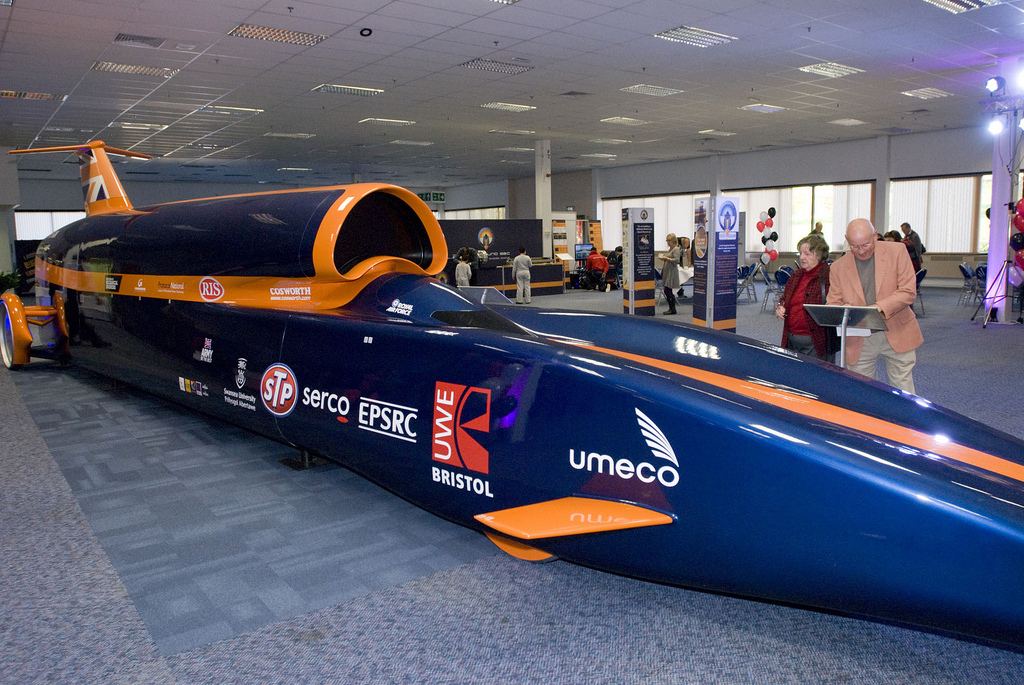 But the chance of such technology entering more general use than one-off attempts to break speed records looks to be extremely slim, given the way things appear to be going in the car industry and related government policy. With most European governments now seemingly in competition as to who can introduce the strictest bans on the internal combustion engine the earliest, we had better forget any idea of Bloodhound-inspired belting down our motorways at 500mph before the fantasy becomes too seductive. We’re more likely to find ourselves in a future of travelling at 50mph… for 50 miles at a time, before having to spend 50 hours recharging the batteries of the electric cars we’re all going to be forced to adopt. Maybe I exaggerate a little for the sake of jest, but the range and charging times of electric cars remains a serious problem that will have to be addressed if they are to truly come to represent a step forward from traditional cars. We have grown used to being able to travel long distances by car with relative ease, only needing a break of a few minutes if refuelling is necessary; it surely cannot be anything less than a step backward if motorists end up having to spend a minimum of half an hour recharging their cars enough to get them a little further on their way. And that’s a best-case scenario, based on the capabilities of what I’m informed are ultra-rapid charging-stations that, so far, only exist at motorway service stations; in other circumstances, one would have to leave one’s car plugged into the mains for 12 hours or more to fully recharge it.

You might also have noticed that public charging-stations are still few and far between, in which case it doesn’t take a clairvoyant to forecast with some certainty that, unless about every parking-bay has its own individual charging-station, the network will be overwhelmed by demand; since it takes so much longer to recharge an electric car than to refuel a conventional one, the extremely long queues to use them will be as horrendous as they are predictable. Serious thought will also have to be given to how charging will work for those without the luxury of a garage, whose cars are parked on the street; it would simply be impractical to have extension-cables spewing forth from everyone’s letterboxes and turning the pavements into an obstacle course. The Bloodhound project is all well and good, and I wish the team behind it good luck, but I fail to see how the technology will be at all transferable in the current climate, exciting though it would be if the trends were going the other way.