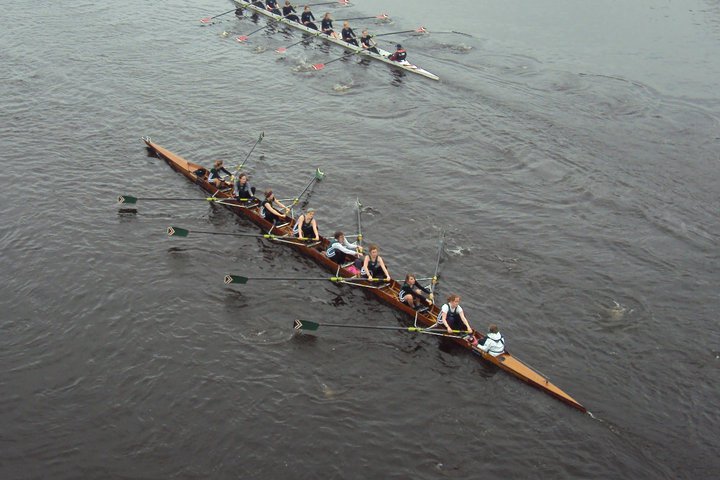 What better way to start a crisp winter morning than crawling out of bed at 5.30am to get down to the boathouse and onto the water? No sarcasm intended. True, my condensing breath may obstruct the striking morning view of the mountains; and equally I have to waddle in an attempt to walk whilst wearing every item of clothing I own, in a desperate bid to keep warm. However, the early mornings have grown on me and having moved up North I am gaining a slight tolerance to the cold. The one final thing I refuse to embrace about rowing is the lycra onesie. The single most unflattering garment ever invented.

Not only is every lump and bump made visible but to make matters worse our crew’s onesies have what appears to be racing stripes down the sides. Now these don’t make me look deceptively fast, as they might do on a sports car, instead they make me look ‘deceptively’ (I would like to believe) wide. But, by far the onsie’s worst aspect is the bum padding. So when you tentatively turn to a trusted friend before venturing out in public in what feels like nothing more than your birthday suit and ask, ‘Does my bum look big in this?’ what answer can you truly expect other than, ‘Yes! My God it looks enormous’. Did the onesie designer never stop to think why it was that underwear designers never made padded pants following the success of the padded bra?

So I had been deliberating for a while what the purpose of a onesie really was. If virtually every other sport had the good sense to wear separate items of clothing then surely rowing must have an ulterior motive to make its competitors look so ridiculous. I came up with the following conspiracy theories: 1) wearing a onesie motivates rowers to train harder and row faster in an effort to tone-up in the hope that one day they will look hot in a onesie (a physical impossibility); and 2) wearing a onesie inspires rowers to get up early in the morning to train before anyone else is awake to see them. However, it was one such early morning practice that the true purpose of a onesie became evident to me.

I’m a bit of a daydreamer at the best of the times, so sat at bow in my own little bubble I was happily rowing along gawping at how beautiful the morning was, and wondering if a sausage sandwich would help to cure my hangover. However, as we turned a corner in the river, being at bow, I was the first to witness a men’s rowing crew posing naked; with only oars to cover what little modesty they had left in this cold weather! I slowed my pace as I began to giggle only to realise that none of the other girls in my crew had noticed yet and were consequently all still rowing at a fast, steady pace. Too late I realised I had lost the pace. The boat continued to move but my oar stayed still, jammed in the water against the rest of the crew’s strokes. My blade consequently catapulted me backwards out of my shoe bindings and very nearly out of the boat. My blade handle then rapidly followed the movement of the boat, swinging powerfully over me from where I was holding it at my waist to up above my chest. It did so with such force that it pushed me over and pinned me precariously onto my back in my seat. Somehow en route from my waist to my chest my blade handle managed to snag the bottom of my top, taking my top up with it as it moved over me. Leaving me pinned topless to my chair.

So it would appear that the moral of the story is to wear a lycra onesie whilst rowing and who knows maybe this would have been a good idea in retrospect. However, I am tempted to think that wearing a lycra onesie alone would have been more embarrassing than being left in my underwear. Instead I have reached the conclusion that a lycra onesie is a bit like Bridget Jones’ big nickers. Sure they are practical as hell but you would rather be naked than caught dead in them. I for one unwittingly already chose nudity and judging by the naked calendar poses it would appear that the men’ rowing team made the same choice.