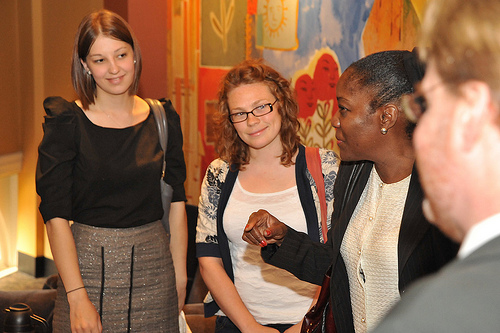 Smiling and nodding: one of many ways to try and cover an awkward moment

Awkwardness is practically visible in Durham, like those weird text bubbles that pop up in the air in Hollyoaks nowadays. It couldn’t not be in such a small city, with most of the students using one small Tesco and passing through Market Square and along Elvet Bridge (speaking as an arts student) so frequently. It is an unavoidable fact of life in The Bubble that you will constantly (mainly when you’re looking at your worst/in an unsociable mood) bump into people you know, feel you should know, detest, fancy the pants off, and those you’re currently blanking/who are blanking you. Not to mention actual friends.

Even with perfectly nice friends/acquaintances, awkwardnesses in standard social interactions are unavoidable. Some personal faves of mine are discovering after a big “Byeee, see ya soon, have a great weekend/life” that you’re walking the same way as the other person, and the cringey moment when the group of people you’re walking with to/from a lecture suddenly diminishes to just you and one other person you don’t know/dislike/can’t remember the name of, and you both know it’s going to be a looong walk. Cue the dreaded Awkward Silence.

Watching the hilariously crap Fearne and… on iPlayer last year I was baffled by Peaches Geldof’s love of awkwardness. Apparently she LIKES things to be uncomfortable (surely the very word “uncomfortable” means that something is unpleasant?) and finds awkward silences “interesting” because “It’s like, ‘What is that person thinking in an awkward moment?’”

I can’t stand awkward silences. There’s always the question of whether both people think a silence is uncomfortable (the other person may be calmly considering what to have for lunch while you’re suffering an inner breakdown) but there are very few people with whom I can share a prolonged, comfortable lull in conversation.

A friend received a text recently from someone asking if they could walk to a lecture with her. When she replied “Yeah, sure” he responded with “Great, I’ll start thinking of things we can talk about”. Obviously he meant it as a joke but for me this hits the nail on the head. With the 95% of people with whom I feel there can be NO silences I’m thinking about what to say next even while I’m talking. I go into overdrive and jabber about myself, life in general or just fire questions at them, whilst panicking that I’m not letting them get a word in edgeways – which I’m clearly not, but I have a terror that if I stop talking we’d be walking along in silence. The rational among you will be thinking “If she shut up then they might fill the silence themselves”, which would make a one-sided psycho rant into an actual, normal, two-way conversation, but I can’t take that risk. As far as I’m concerned, awkward conversations are a game of chicken and I ALWAYS crack first.

This inability to cope with silences has resulted in my friends kindly giving me the role of official Awkwardness Diffuser, to the ridiculous extent that I’m not allowed to go to the toilet until the awkwardness is diffused. I feel a keen sense of social responsibility and at the start of a night out, when everyone is sober and the group is a motley one, I am willing to do pretty much anything to break the awkwardness. For instance, a year ago I was at a course where no one knew anyone, so I deliberately made a complete fool of myself to give them something to talk about/laugh at, by telling them my life plan (becoming fluent in French, then living in Italy and becoming fluent in Italian too, then marrying an Italian and having tri-lingual children, since you ask). I was mocked but it worked: everyone relaxed as they bonded over my freakishness.

I reckon modern society has a bit of an obsession with awkwardness, which in turn makes things more awkward. The awkward turtle, awkward sloth, awkward balloon, awkward salmon, sexual tension jellyfish etc. have infiltrated into our lives so that we’re now so aware of awkwardness that when something awkward does happen, we can’t resist emphasising it. When something awkward happens to me (very often) I now have a massive urge to do a little awkward turtle gesture and say “Aaaawkward” to myself.

Many social awkwardnesses (having a one on one coffee at a tiny table and falling into the trap of thinking too much about eye contact, for example) are unavoidable facts of life and should be skimmed over. When someone helpfully says “Well, this is awkward” during a slightly tense bit of chitchat or an introduction, the vague feeling of discomfort is rocketed into full-blown unbearable, torturous awkwardness. However, for seriously obvious, painfully awkward moments (such as joining the queue in Tesco to find yourself next to the guy you got with and threw up on the night before) there’s nothing to do but save the cringing for later. Be self-deprecating, laugh, and console yourself with the knowledge that you can reduce further awkwardness for yourself by adding the sorry tale to your mental (please don’t make an actual one) list of awkward-silence fillers. Sorted.