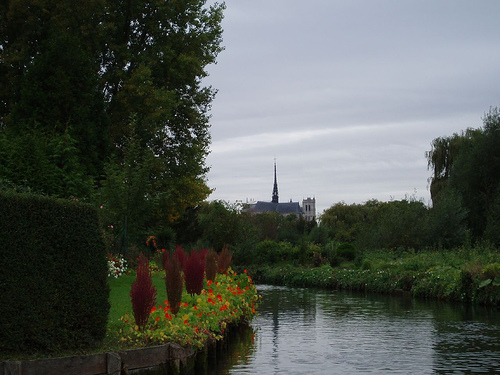 So it’s time for another column of mine, and rather than fill it with little anecdotes that only I and perhaps my loyal mother may find hilarious, I thought this week I would take a more cultural approach and give you an overview of what the fabulous city of Amiens has to offer. Think of it perhaps as an alternative guide to life in the heart of Picardy. However, as I cannot possibly write about everything there is to do in Amiens in 1000 words I shall just pick out a few little gems.

First stop has to be without question the Notre-Dame Cathedral, which the Amienois regard as the jewel of their city. It was granted status as a UNESCO heritage site in 1981, and it is indeed evident to all who visit this sublime building exactly why. It is one of the largest ecclesiastical buildings of which the Picardy region can boast and a breathtaking example of French Gothic in its most characteristic phase. Conceived in 1220 by Bishop Evrard de Fouilly with the plans for the edifice being constructed by Robert de Luzaches, many regard the cathedral as the culminating effort of French gothic architecture as it is such an authoritative building, unsurpassable in its beauty. As a visitor to this cathedral you cannot possibly be overwhelmed with admiration and awe as you stand on the square in front of it; the perfection of the detail, the wealth of imagination and elaborate sculpture on its western façade and its grandeur are simply breathtaking. However the interior of the building is just as impressive.

The cathedral is home to the largest medieval interior in Western Europe and still has a vast amount of stained glass windows, having survived the depredations of war. The original impetus for the cathedral stemmed from the installation of the reputed head of John the Baptist in 1206, part of the loot from the Fourth Crusade. A sumptuous reliquary was created in which to keep the skull and although this has since been lost a 19th century replica now is present in the North aisle to provide a focus for prayer and meditation. So if you fancy looking at some pretty architecture or an 11th-century skull, this is the place for you!

Second stop on my little tour of Amiens would be Les Hortillonnages. These “floating gardens” are reached by boat and have been cultivated since the Middle Ages by market gardeners. The River Somme and Avre encapsulate the gardens which extend over 300 hectares. Canals intersect the plots of land and you visit the gardens on a boat trip, in little boats called “barques à cornet”.

During your tour on the boat you learn about the flora and fauna which surround you and how the land has been cultivated over time. Indeed until the beginning of the last century the fruit and vegetables of the Hortillonnages fed the city of Amiens. The location is indeed idyllic and a relaxing way to spend an afternoon under the Picardy sun.

Now I’ve mentioned before in my column that the Amienois are a little bit in love with Jules Verne, so of course the “Maison de Jules Verne” is open for the public to see. His house is beautiful and offers visitors the chance to see the imaginary world and the daily life of the famous writer infuse. He lived here between 1882 and 1900 and the luxury 19th century mansion witnessed the author’s success as he wrote the majority of his “Extraordinary Voyages” there. The personality of the author, his inspiration and memories are exposed through the imposing house and the visitor is able to relive the adventures of his heroes, such as Michel Strogoff, Phileas Fogg and Captain Nemo.

Now as a student it would be a crime to not mention nightlife in my little alternative guide. I cannot fail to mention the little Irish pub that has been my haven for the past five months. Hello “My Goodness”. This pub has pretty much been my second home during my time in Amiens due to the convivial atmosphere, cheap(er) drinks and barmen with Irish accents (always a win). The pub certainly exudes Irish spirit and with pub quizzes, a large screen to watch sports games and British music (score) it really is a drinking establishment not to be missed.

Another favourite of mine has to be the Australian bar. Every Tuesday without fail I make a little trip there, partly to have a little laugh at the French who attempt to “sing” karaoke but predominantly because its choice of music takes me back to my youth. Hello the Spice Girls, Britney Spears and oh yes, the glorious Barbie Girl. There is nothing I love more than jumping around like a four year old after a sugar overdose to this wondrous creation of Aqua’s. I love it. And therefore I cannot recommend the Australian Bar enough to anyone who, like me, has a secret love for the cheesier side of life. However if you really want to immerse yourself in a French drinking environment you must head to the St Leu area, infamous for its vast array of bars situated by the canal. Here you will find many a fairly intoxicated French student breathing a lively and effervescent night life into the town. Fabulous.

Anyway I’m off to Paris tonight so my next instalment shall hopefully include some fabulous tales from the city of love, fashion and beautiful architecture… Bisous.