Alfred Hitchcock: The Master of Suspense 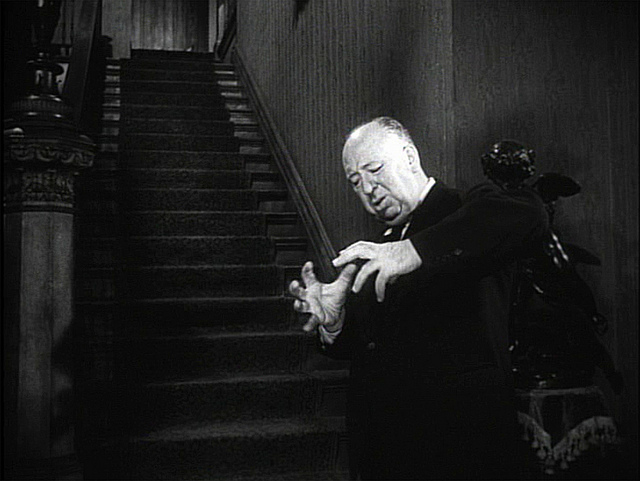 He may have got the movies down, but ol’ Alfie never did figure out a Rubik’s cube…

There is no one director quite so famous for suspense films and psychological thrillers as Alfred Hitchcock. He directed over forty sound films in his time, but began his career much earlier in the silent era. Though originally British, once he became well-known he moved to America in 1940 and would only return to Britain years later for two further films.

Hitchcock’s films have a lot of similar themes and tropes – he chooses to experiment with elements of his plots but keeps much of the same basic structure. A Hitchcockian hero is an everyday person who gets dragged into extraordinary circumstances; regular people who were in the wrong place at the wrong time (such as in The Man Who Knew Too Much (1956), where the man in question’s only crime was being around to hear the words of a dying man). People in Hitchcock films are constantly being mistaken for other people and being chased for crimes they didn’t commit (murders, thefts, sabotage, you name it). These kind of plots lend themselves to the use of ‘MacGuffins’, a phrase and plot device that Hitchcock himself popularised, which are objects or plot elements that major characters in the story are desperate to obtain, but which are not in themselves important to the plot (like state secrets being exchanged by spies or a hidden diamond). Meanwhile the woman tend to be blonde beauties, who are refined and cold, but often get broken into showing their passionate side (and there is bookloads of material out there on whether or not Hitchcock was a misogynist…as well as plenty of angry people who are entirely willing to argue one way or the other).

Hitchcock loves suspense and shows the audience danger before his characters are warned; in Family Plot, we see brake fluid leaking out of a tampered car and watch the couple get in unsuspectingly to what is supposed to be a death-trap. Yet he also revels in his ability to shock his audience; though the shower scene in Psycho is now famous, there is no warning to indicate to the audience that the main character is about to be killed off except some vaguely threatening music. Yet Hitchcock always manages to enliven even the most serious of thrillers with an ironic humour and plenty of sexual innuendo; all of which he believed only heightened the suspense of his films. Characters get put in ever more ludicrous situations and have to deal with them in kind; Cary Grant’s character in North by Northwest is literally chased by an aeroplane, forced to drink against his will and gets himself arrested as a heckler at a public auction to prevent being killed. Many Hitchcock films, like Shadow of a Doubt (1943), feature characters that obsess about murder or laugh at confessions of murder, never knowing how close they are to danger. Hitchcock was already regarded at the time he made his films as pretty sexualised even while following the rules of censorship, but he still managed to use innuendo and imagery to get his point across (when a shot cuts from two amorous people to the final image of a train entering a tunnel in North by Northwest, it leaves little to the imagination). The quickest way to spot a criminal is to look for the seemingly most charming person, the one who is well-liked, respected and may have a prominent place in local society, because these are the people Hitchcock has murdering left, right and centre.

But, as with many perfectionists, Hitchcock could show an unhealthy commitment to getting the perfect take – mostly at the expense of others. Hitchcock ordered live birds to be allowed to attack Tippi Hedren, the lead actress in The Birds, finally reducing her to tears as one of them nearly clawed her eye out. Hedren stated in a later interview that Hitchcock had used his influence to destroy her film career after she spurned his sexual advances (which should come as no great shock to anyone). While filming The Thirty Nine Steps, Hitchcock decided that the best way to break the ice between his leads was to handcuff them together for hours. When a couple of the actors while onset started to giggle in a later scene, he smashed a bulb in a studio lamp. He arguably had some parental issues: he would speak later in life of his mother making him address her, standing for hours, at the foot of her bed (and if Psycho doesn’t show some deep-seated mother issues, nothing does). But all these issues aside, Hitchcock films are still inspiring film directors to this day and Hitchcock himself remains to be beaten for the perfectly formed thriller.

One of his older British films, and a classic example of the mistaken-for-a-criminal, accompanied by an icy blonde, searching for a Macguffin plot. The plot is tightly formed; the opening in the theatre which seems to bear no relevance once the plot gets going will circle back in the end and become vital. Hitchcock purposefully defies our expectations. When the man fleeing the police comes into the train compartment of Pamela and kisses her, we expect (as rules of romance demand) that she will defend him. What she proceeds to do is turn him straight over to the police, which is exactly what any rational person would do. The sexual tension and hostility between the two main characters fizzes, especially in the scenes where they are handcuffed together, sharing a bedroom against their will. And as far as comedy goes, the speech that the main character ends up being forced to give for a political candidate that he had never met is wordplay at its finest.

If you are the kind of person who is going to be really bothered about why the birds suddenly start attacking everyone, this is not the movie for you. The explanation could be anything from a natural disaster to the sexual jealousy of a mother over her son’s new girlfriend. If you like horror movies on the other hand, then all you need to watch is the scene where, as the heroine sits on a bench in front of a school, birds slowly begin to land on the playground behind her, silent and deadly. Considering the age of The Birds, the special effects were handled well and it still manages to be scary. The film ends on a downer note; as the previously boarded-in family leave the house, the birds do not attack, but they are everywhere and seemingly the victors in the war against the humans.

This film exemplifies the way in which Hitchcock loves to make voyeurs out of his audience. While James Stewart, holed up in his room with a broken leg, watches his neighbours through their windows using binoculars, we follow his point of view and become involved in the spying ourselves. When he forces his girlfriend to break into a murderer’s apartment, we then watch with him as she becomes part of the murder tale, played out across the courtyard as though on a cinema screen. When the murdered finally enters Stewart’s apartment to accuse him, it is the audience he looks to blame for spying, and for being more fascinated than horrified by murder. The small set of one apartment block causes a sense of claustrophobia that matches that of the man trapped in his room by a broken leg. Meanwhile, there is every type of couple imaginable present to see from true lovers to a man driven to homicide by hatred of his own wife, that all seem to provide guidance for the main character and his ambiguous feelings towards his own girlfriend.