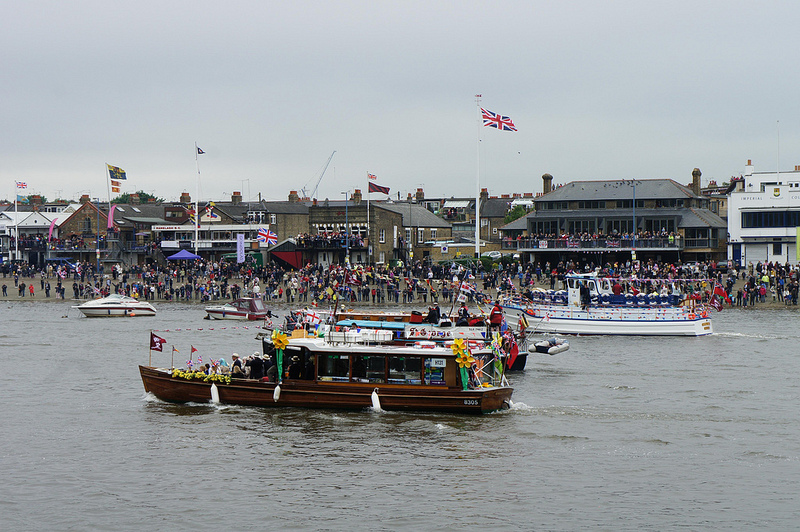 Having ignored the poor dear for the last couple of years the British nation decided last weekend that we should probably do something to say sorry, and to show that we love her really. So how do we do this? Now remember that this is a person whose job for the last sixty years has been to wave and smile at complete strangers. How do we show an eighty-six year old woman that we care about them?

We stick the poor dear on a boat in the rain and wind, for over four hours. We fill this river with nine hundred and ninety nine other boats, increasing the chances of a crash, so now not only are we forcing her to work during her own celebration but she is soaked to the skin and scared to death of her boat crashing. It was brilliant. Only the British could think that putting a lot of boats on the river was a celebration; the Venetians must have thought us bonkers.

But it was not just the flotilla; we also held ‘big lunches’ across the country. These lunches allowed us to finally reuse those long tables we had made for the last jubilee, put on the Union Jack tablecloths, get out the cucumber sandwiches and hurrah when the Queen is shown on the TV. I think what made the weekend special was the spectacle, the one thing the British are good at is Pomp and Circumstance; I was so caught up in the Englishness of it all I even thought I could hear Handel on the breeze but that just turned out to be the orchestra boat.

So far I have failed to mention the Jubilee concert; organized by that chap who is in that band that has Robbie Williams in it. I don’t really know what the aim of the concert was, or at least I didn’t see the need, it wasn’t for the Queen as I don’t think her music tastes extend to JLS or Jessie J. But hey ho I suppose not everyone is satisfied with a river and a thousand boats, I suppose some of the nation are bored, tired, frustrated with boats, maybe they have seen the River Thames and a thousand boats before. I mean it is quite a regular occurrence; every three hundred years is regular right?

This year there are two opportunities for the British to show the world that we are still important. For me the Jubilee was the most important because it showed that we were still proud of being British. Screw the Olympics, who cares that a lot of sportsman are coming to London in the summer, throwing sticks and jumping over things? All we need is a little old lady to wave at us from a big fancy boat and we are happy.