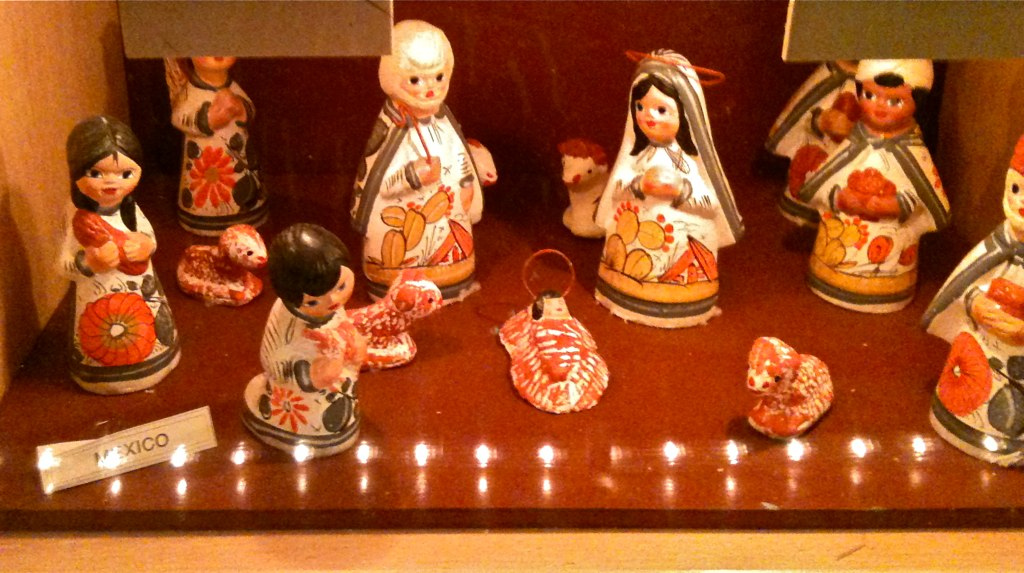 At an average of nearly 22 degrees celsius each day, December in Mexico City doesn’t feel all that Christmassy for a Geordie lad used to snow and long, dark, cold winter nights. But, Christmas in Mexico does have some very special traditions and celebrations all of its own.

A History of Christmas

In Europe, many Christmas traditions evolved for pagan winter solstice rituals of the Celts, Druids and also the Jewish Festival of lights. While Christmas in Mexico is of course a celebration of the birth of Christ, the timing coincides with the ancient Aztec worship of the sun god Huitzilopochtli during the nine darkest days of winter.

Many of the Mexican traditions today have Spanish roots. One of these is La Posada which is a religious procession celebrated from the 16th to the 24th of December re-enacting Mary and Joseph’s search for shelter before Jesus was born. This series of processions over nine days was invented by missionaries at the time of the Spanish conquest seemingly to comfort and convert the former Aztecs.

As the people walk from home to home they sing the special song of the posada where Joseph asks for a home to stay for the night. Finally, at a prearranged location, the Innkeeper and friends sing from inside the house:

“Enter holy pilgrims, receive this humble corner, that while we know it is a poor lodging, it is given as the gift of heart.”

The party then begins as children try to break piñatas for sweets, clambering over one another to gather candies. This is a spiritual and joyous occasion.

Although the piñata originated in China, it is traditionally the party favourite of Mexican children. The traditional piñata is heavily laden with symbolism, its seven points representing the seven deadly sins, and the breaking of the piñata with the ensuing shower of sweets, fruits and nuts expressing the triumph of good over evil. The blindfolded person represents the blind faith in fighting evil, manifested in a faith in God’s goodness.

Whilst in the UK we have pantomimes, Mexico has pastorelas which present wildly exaggerated and naïve plays about the birth of Christ. They originally came to Mexico via missionaries in an effort to teach the local population about Christianity.

Today these improvised scripts of shepherds going to visit the birth of Jesus are filled with jokes, jeers, song, slang, bawdy humour, and tequila. They always have a fight to the death between Lucifer and the Archangel Gabriel. This is an event not to be missed.

Six years after the Spanish arrived in Mexico, Fray Pedro de Gante introduced Christmas through the “Misa de Gallo” or the Rooster Mass and it quickly became popular with Aztec converts to Catholicism as the celebration blended traditional Christian elements with Aztec traditions such as using fireworks, sparklers and ponche (a delicious Christmas fruit punch) as well as indigenous dances and tasty tamales.

The house is decorated with poinsettia flowers or noche buenas. This flower’s star-shaped leaf was said to symbolize the Star of Bethlehem and the red leaves represent the blood of Jesus. The Aztecs had used them to make dyes and medication as well as in their human-sacrifice rituals, the leaves being a reminder of those who were sacrificed. There is also a very delicious beer called Noche Buena that is only available around the Christmas period.

Children open their presents on the night of the 24th and then also receive a gift from the Three Wise Men on January 6th.

Christmas dinner consists of turkey with romeritos (a herb that looks like grass), ponche and cod.

During Christmas, bakeries are filled with Roscas de Reyes, an oval sweetbread with sweet candy fruit. To celebrate the epiphany the rosca is served with tamales, a tasty treat made of corn a little similar to cous sous, along with hot chocolate.

Hidden inside the Rosca bread is a figurine of the baby Jesus. As each person cuts into the bread they hope they won’t find the little baby as it will mean that they will host, and invite everyone present to a new celebration on February the 2nd called the Candelaria or Candle mass day and provide tamales and hospitality for all.

I have only spent one Christmas Day here in Mexico, relaxing on the beach in Manzanillo, drinking margaritas. But each year I have enjoyed the build up to Christmas in Mexico with all of its tasty treats and special traditions. Sometimes it can be difficult to spend Christmas away from home but this year I’ll be back in the North East, enjoying the snow and warmth of the local pub but perhaps bringing a Rosca de Reyes home with me especially for my family and friends to try,