A Brief History of Knickers

Harriet Mallinson in Columns on 24 November, 2013. 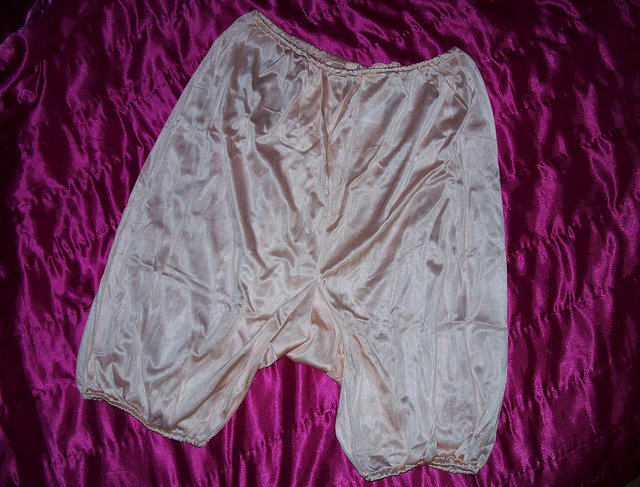 Knickers, in a twist or otherwise, are something of a necessity at some point or another, I think we can all agree. A woman’s knickers can say volumes about her, and they are certainly something to be chosen wisely. A comedy pair of pants for one person may signal the ultimate turn-off for another. Apparently cartoon animals are not an aphrodisiac as I have been forced to discover the hard way. We put underwear on every day (well, most of us do) but how much do we really know about this nether-region covering garment?

Underwear (or rather pantaloons) was originally introduced for warmth, during the Regency era, and were practically harem pants. This evolved into a two-separate-legging affair which joined at the waist. Unsurprisingly, when the extreme prudishness of the ol’ Victorians’ kicked in, this was swiftly made into one item of clothing; dubbed knickerbockers or drawers. God forbid any contact with the outside world. If we bear these in mind – plus the layers of crinoline, petticoat and dress etc. a woman was forced to wear – the lack of action we find in Charles Dickens comes as no shock. Natural contraception, if you ask me. One might as well stick to a chaste kiss as there would be no point getting worked up, only to be faced with half an hour of hunting around.

It strikes me that if we were to describe a modern woman’s lifetime of knicker-wearing on a graph, we would be left with something akin to an inverted bell curve: from big to small and back to big.

We start off life in the biggest knickers of all: nappies. Enormous, white, often present-filled monstrosities that should be steered clear of if possible; not to mention they give a baby booty that puts Ann Summer’s range of bottom-boosting, butt-enhancing underwear to shame.

Following this stage, and further down the curve, we have what I term ‘sensible’ underwear, which, although almost half the size of its predecessor, remains entirely practical, often comes in pastel shades (why is this?) and has a bow at the front. And should one accidentally flash someone whilst doing a roly-poly or a spontaneous handstand…pas de problème. The ‘knicker-trick’ will forever be my favourite thing about this phase of life: how to change your knickers without flashing anyone. Genius; although not advisable for those with bad balance. It took me multiple Brownie holidays and swimming lessons to master and gave me years of satisfaction. Easily pleased, some might say.

However, the ease of the above cannot be said for the next category along the curve (the timescale of which depends on your promiscuity/choice of skin-tight clothing): thongs/G-strings. That dreaded item of somewhat-unnatural underwear that leaves you with the “this-will-look-good-under-my-leggings/bodycon-dress-but-I-feel-like-I-constantly-have-a-wedgie” debate. Nightmare. Nonetheless, no one can doubt the sex-appeal this category presents. As Bridget Jones says, “This is an occasion for genuinely tiny knickers”, and look at the men she roped in.

The ancients, it would seem, did not share this dilemma. If we step aside from Western cultures and further back into history, we find ourselves confronted with the loincloth. Let’s face it, just as David Gandy did great things for Dolce & Gabbana, so Jesus did great things for the loincloth. Although, if we’re facing the facts, they essentially boil down to a thong – given the rear exposure – only they have excess material and are potentially more comfortable. Similar to the loincloth we also have the breechcloth, which could be made from cloth (acceptable), leather (a bit kinky, no?) and bark (odd…very odd).

Asia, Africa and South America were the biggest advocates of this particular branch (sometimes literally, considering the bark) of fashion, with the loincloth falling out of favour in Europe following the fall of the Roman Empire (‘Shame!’ I hear you cry.) Japan, however, still love a bit of loincloth-action, given their penchant for sumo-wrestling and the mawashi the wrestlers wear. Now there’s a sport I never will quite understand: fat men in thongs grappling each other in questionably obscene positions. Nope, just can’t see the appeal.

The climax of the graph is, of course, opting for nada. Only for the bold, I reckon. This is Samantha’s category of choice from ‘Sex and the City’ during dates, due to the number of times she left underwear at men’s houses. Going commando is simply the most practical option for her. And, to be honest, I think we can all see the logic in that. There’s nothing worse than the ol’post-coital fumble around the bed to salvage missing underwear that was cast aside in the throes of passion.

Nevertheless, this isn’t in fact a 21st century phenomenon. Did you know, before the French Revolution, they wore no underwear whatsoever? Slags, the lot of them, I say. Well…that and the fact that the heavy skirt/petticoat combo didn’t really require them. This certainly explains those bosom-heaving period dramas where doing the dirty seems to happen willy-nilly with minimal fumbling. As I said, slags.

Yet, as the graph makes its way back up, and the years of cellulite, baby-producing and longer hemlines takes its toll, women may down their tools and revert back to sensible knickers, although perhaps minus the bow. Not that many handstands will be taking place, but why endure the price and pain of [insert lingerie shop of choice] when you could just opt for plain and simple? This is of course where granny pants come into play. Huge and unsightly but keep everything tucked it – nifty really. And if Hugh Grant was aroused in ‘Bridget Jones’s Diary’, it’s possible that they aren’t all that bad…

Then, as the graph wends its way upwards, right back to where it began, and we find ourselves well into the ‘golden age’, it’s entirely probable that nappies once again become a necessity, for those moments when the climb up the stairs to the loo is quite akin to a hike to Mordor.

This all being said, all these knickers (nappies excluded) can be crucial at any stage of life (well…post-infancy and pre-senility…no one wants a baby or a granny in a G-string). There really is a time and a place for all of them. Let’s just hope we don’t get caught unaware wearing Pingu adorned granny pants any time soon, because that would certainly be something to get them in a twist over.

Personally, I’m holding out for the return of the fig-leaf…